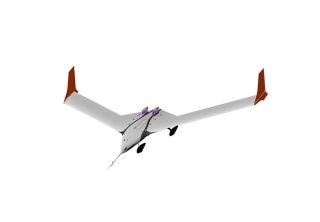 A new U.S. Air Force drone could help solve the sonic boom problem that has prevented supersonic airline travel from really taking off. NASA plans to see how the robotic airplane's computer can adjust to turbulence during subsonic test flights this summer.

The small X-56A drone has long, thin wings and flies slower than the speed of sound. But it can test software programs that respond automatically to uncontrollable vibrations from the force of air flowing over its flexible wings — useful knowledge for designing quieter, lighter supersonic or hypersonic airliners of tomorrow that won't rattle people or windows below.

NASA plans to oversee test flights of the Multi-Use Technology Testbed  drone built by Lockheed Martin and commissioned by the Air Force Research Laboratory. The U.S. space agency will take over use of the experimental drone after the Air Force tests finish up in the fall.

The drone has a length of 7.5 feet (2 meters) and wings stretching 28 feet (8.5 meters) — bigger than any living or dead bird's wingspan. It must rely upon smart flight software to protect its long, thin wings from having problems with "flutter" vibrations and stresses from wind gusts or atmospheric turbulence.

"To maintain the long-term health of the structure and ride quality in a more flexible airplane, we need to actively alleviate gust loads on the airplane and suppress flutter, so gust load alleviation and active flutter suppression are two of the key technologies that NASA is working to advance," Martin said.

Successful flight tests this summer could lead to a better design for the proposed X-54 — a supersonic aircraft that will test technologies for muffling sonic booms. Such experimental aircraft could eventually create a future for supersonic airliners such as the retired Concorde to fly once more in the friendly, quieter skies.