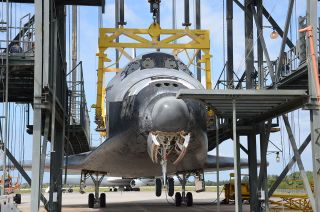 Space shuttle Discovery, suspended in Kennedy Space Center's Mate-Demate Device, was delayed a day being lifted atop its jumbo jet ride to the Smithsonian due to winds on April 14, 2012.
(Image: © collectSPACE.com/Robert Pearlman)

CAPE CANAVERAL, Fla. — NASA's scheduled pairing of the space shuttle Discovery with its jetliner ride to the Smithsonian was postponed on Saturday afternoon (April 14) after wind gusts prevented workers at the Kennedy Space Center in Florida from safely hoisting the retired spacecraft atop the modified-Boeing 747 Shuttle Carrier Aircraft (SCA).

"Based on the wind direction and the criteria, we did not exceed the sustained winds, but we did exceed the wing gust criteria. And we exceeded it by a little bit over three knots," Bart Pannullo, NASA's transition and retirement vehicle manager, told collectSPACE.com. "Based on the wind direction, the wind criteria changes, so I cannot give you a definitive knots per hour, just that we were in violation by three knots in the directions that we had today."

Technicians planned to pick up their work mating the two vehicles at 5:00 a.m. EDT (0900 GMT) Sunday (April 15). The overnight delay is not expected to affect Discovery's Tuesday (April 17) departure to Washington, D.C., where it is to be delivered to the National Air and Space Museum's Steven F. Udvar-Hazy Center for permanent display.

Swaying in the wind

On Saturday morning (April 14), Discovery was towed out of the Kennedy Space Center's Vehicle Assembly Building to the Shuttle Landing Facility, where the orbiter last came back from space in March 2011. At the end of the runway, Discovery was positioned inside the Mate-Demate Device (MDD), a gantry-like steel structure used to lift the shuttle on top of the jumbo jet carrier aircraft. [Gallery: Discovery Returns to the Runway]

Before the winds halted their work, technicians were able to attach to Discovery the large metal yellow sling used to hoist the orbiter inside the MDD. They lifted the shuttle's nose in preparation for retracting Discovery's landing gear but the gusting winds caused the 167,000 pound (75,300 kilogram) spacecraft to sway.

"We did get the sling attached and we did lift the forward portion of the vehicle," said Pannullo. "The next step we would have done was lifted the entire vehicle and retracted the gear. We did not get past that point."

"The primary concern," he continued, "was that when you lift the orbiter, the wind will move it and potentially make contact with the platforms that go around the orbiter."

"So right now we've got the nose gear off the ground and what we have done is we've put cribbing around the nose landing gear so that overnight the vehicle cannot sway and we have locked out the crane," said Pannullo.

"Our plan Sunday is to come in early, get a quick weather call to make sure we're not violating any criteria, and we'll go ahead and lift the aft, retract the gear, then lift the vehicle the rest of the way. We'll get the SCA rolled under, get soft-mated, and then get hard-mated towards the end of the day," he said.

If time permits, they will then remove the sling as well.

"If we run out of time or if we have some issues tomorrow, we would probably take the sling removal out to Monday, but that would not inhibit our [plans]," Pannullo said.

Assuming the new schedule proceeds smoothly, NASA is planning to give its workers, the media and public visitors a last chance to see Discovery, mounted atop the Shuttle Carrier Aircraft, on Monday (April 16). The next day, the air- and space-craft combo will fly to Washington, weather permitting.