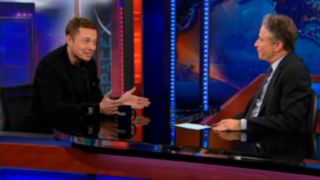 The commercial spaceflight company Space Exploration Technologies (SpaceX) is preparing to launch a robotic capsule to the International Space Station later this month. If successful, SpaceX will be the first company to dock a privately built spacecraft to the orbiting outpost.

But preparing for the historic flight has been challenging, SpaceX's billionaire CEO Elon Musk said.

The unmanned Dragon capsule is slated to launch atop the company's own Falcon 9 rocket from the Cape Canaveral Air Force Station in Florida on April 30. It will be the second flight of the Dragon spacecraft, but the first time the California-based company attempts to rendezvous and dock with the space station.

"There are a huge number of things that we had to address," Musk told SPACE.com. "The biggest thing is to pass all of NASA's safety requirements for going and docking, or berthing, with the space station, because the space station is a $100 billion asset. It has astronauts from different countries onboard, and Dragon is approaching it as a robotic spacecraft, and if it were to go haywire, in theory, it could damage or destroy the space station. So, it has to go through a very rigorous set of safety and reliability requirements and pass all those, which we just got our approval last week. That was the toughest thing."

The flight is designed to demonstrate Dragon's ability to haul cargo to and from the space station, and while it represents an important step forward for the commercial spaceflight industry, Musk is cautious about its implications. [Photos: Dragon, SpaceX's Private Spaceship]

"This mission is important, although I wouldn't want to place too much emphasis on the success of this mission, because it is a first-time effort and if there's any danger or concern with respect to the space station, then we will have to abort and try again on a different flight," he said.

Musk founded SpaceX in 2002, and the company is celebrating its 10th anniversary this year. He is SpaceX's chief engineer and also serves as the CEO of Tesla Motors, the electric car company. Musk made his fortune as co-founder of the online payment system PayPal.

SpaceX is one of several private companies developing new spacecraft to carry cargo and astronauts to and from low-Earth orbit. SpaceX intends to use a version of the Dragon capsule to eventually fly humans to the space station. After that, Musk has his sights set on the Red Planet.

"I think what we're doing is showing that there's a steady march of progress, and that in a few years, I will be taking astronauts to the space station, and then ultimately far beyond the space station," he said. "Our ultimate objective is Mars, and it always has been."

And as for whether the billionaire entrepreneur has spaceflight ambitions of his own?

"I would like to fly in space," Musk said. "Absolutely. That would be cool. I used to just do personally risky things, but now I've got kids and responsibilities, so I can't be my own test pilot. That wouldn’t be a good idea. But I definitely want to fly as soon as it's a sensible thing to do."