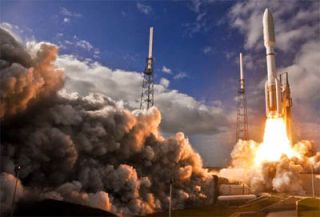 The GOES R and GOES S satellites are slated for blastoff from Cape Canaveral in October 2015 and February 2017, respectively.

The launcher of choice is the Atlas 5-541 configuration, the same rocket that dispatched the Mars Science Laboratory's Curiosity rover last November.

The rocket will be fitted with four strap-on solid motors and a bulbous five-meter shroud to encapsulate the single-engine Centaur upper stage and payload.

The combined tab for both satellites' launch services, including the rockets themselves, prepping the spacecraft at the launch site, ground support and the necessary tracking, data and telemetry relay, is $446 million.

Lockheed Martin is building both spacecraft under management by NASA's Goddard Space Flight Center. NASA oversees the development of weather satellites on behalf of the National Oceanic and Atmospheric Administration, or NOAA, which will operate the craft once in orbit.

Geostationary Operational Environmental Satellites, or GOES, is a long-running program to provide the weather imagery seen daily during news broadcasts, allowing meteorologists to track conditions and forecast the future across North America.

The GOES constellation features a West satellite and an East orbital slot for full coverage of the U.S. The current fleet also includes an in-space spare.

The upcoming generation of spacecraft will offer improved resolution, faster coverage and additional bands of imaging. The series is expected to operate through at least the late 2020s.