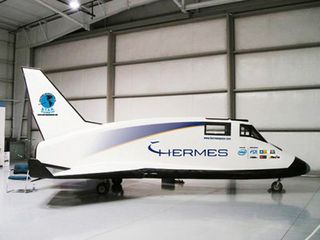 Plenty of billionaires have backed private spacecraft ventures in the hope of launching suborbital tourism flights. But one aerospace startup has turned instead to Kickstarter's online donors for help funding a bigger rocket for its suborbital space shuttle.

The startup's Hermes Spacecraft resembles a miniature U.S. space shuttle with a shorter body and stubbier wings. Its visionaries at Space Transport and Recovery Systems (STAR Systems) have asked netizens on Kickstarter — a crowd-funding website — to contribute $20,000 for a full-size test of a hybrid rocket capable of putting out 5,000 pounds of thrust.

"We are developing the Hermes Spacecraft: a reusable suborbital spacecraft that will take passengers and payloads into space," according to the Kickstarter project description. "We want to provide the ultimate joyride, a thrilling ride to space where passengers can experience zero gravity, see the curvature of the Earth below and the star-filled black sky above."

Anyone who cares to contribute to the $20,000 rocket test firing can expect a wide variety of goodies such as stickers, T-shirts and personalized messages launched aboard the Hermes maiden flight. More generous donors can claim a "handcrafted Hermes model" ($500), an advertisement on the side of the spacecraft ($5,000), and a round trip with accommodations to the rocket motor test firing plus first dibs on pushing the ignition button ($10,000).

The Hermes began in 1978 as the vision of Morris Jarvis, an aerospace entrepreneur and an Intel program manager. Jarvis spent several decades putting together a full-size Hermes prototype based on interviews with NASA astronauts and engineers involved with the retired space shuttle fleet. But he still needed a way to launch his spacecraft.

That led him to aerospace entrepreneurs Kris Schneider, Mark Longanbach and Devon Chellevold, who had founded their own aerospace venture in 2004. Their efforts had focused on an "Enabling Hybrid Rocket Propulsion System" to launch spacecraft — an ideal match for Hermes. The two groups officially joined under the STAR Systems name in 2011.

If the Hermes project hits the $20,000 pledge goal, $10,000 will go toward setting up 40 sensors to eyeball every part of the rocket-firing process. Another $3,000 goes toward computer hardware that can automatically monitor and record the rocket firing data from the sensors. About $2,000 more goes toward nitrous oxide bottles and gas, rocket fuel and some "nuts and bolts."

One previous Kickstarter project tried raising $25,000 to develop $5,000 kits for sending your own rockets to the moon, but failed to meet its goal. Perhaps spaceflight fans will prove more generous with the Hermes project — especially given that the STAR Systems team has videos detailing their work so far.