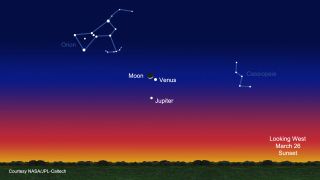 This NASA sky map shows the positions of Venus, Jupiter and the moon on March 26, 2012 during a potentially spectacular conjunction of the three objects.
(Image: © NASA/JPL/Jane Jones)

Two bright planets in the evening sky, Venus and Jupiter, will put on a nice celestial show on Sunday (March 25), and NASA is inviting people to talk about it online as it happens.

This weekend, Venus and Jupiter will shine together in the western sky, and the slim crescent moon will also play a part in the celestial show.

The agency is hosting a webchat Sunday from 8 to 10 p.m. EDT (0100 to 0300 GMT March 26), during which participants can discuss how Venus and Jupiter are aligned in the sky.

Melissa McGrath, chief scientist in the Science & Technology Office at NASA's Marshall Space Flight Center in Huntsvilla, Ala., will also be on hand to answer questions about the skywatching event, which astronomers call a conjunction.

During the webchat, users will also be able to tune into a live feed of NASA's view of the planets as they brighten the night skies. [Great Skywatcher Photos of Venus and Jupiter]

"This will be the best Venus-Jupiter conjunction for years to come," NASA officials said in a statement.

On Sunday, the slender crescent moon will hover slightly above Jupiter, about 3 degrees to the right of the planet. For perspective, if you hold your clenched fist out at arm's length, this is roughly equal to 10 degrees.

In North America, Jupiter and the moon will be closest together at around 9 p.m. EDT. If there are clear skies and good conditions, it should be fairly easy to pick out all three celestial targets with your naked eyes. But, if you have a pair of binoculars or a telescope, the moon and two bright planets are expected to provide a skywatching treat.

Venus will appear about 10 degrees above Jupiter and the moon so that the three objects form a long, narrow isosceles triangle.

By Monday evening (March 26), the moon will appear closer to Venus. This time, the crescent moon will be located less than 3 degrees to the left and just slightly above Venus.

To participate in the discussion, people should visit NASA's webchat page a few minutes before 8 p.m. EDT on Sunday (0100 GMT March 26). A module will appear at the bottom of the page, which will allow people to log in, ask questions and see NASA's view of Venus and Jupiter.

But NASA isn't the only one who will be broadcasting the skywatching event.

The online Slooh Space Camera will show a real-time feed of Venus, Jupiter and the crescent moon on Monday (March 26) starting at 10 p.m. EDT (0200 GMT March 27). Views from multiple observatories will be included in the broadcast, including shots from Arizona and the Canary Islands off the coast of Africa.

The feed can be accessed at Slooh's homepage, or by visiting the observatory's Google+ page, where people will be able to see Patrick Paolucci, Slooh's vice president of sales and development engage in a panel discussion with Astronomy Magazine columnist Bob Berman and other guests.