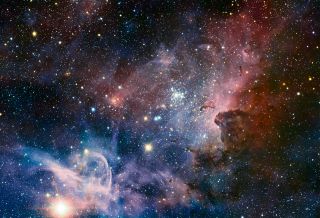 This panorama of the Carina Nebula, a region of massive star formation in the southern skies, was taken in infrared light using the HAWK-I camera on the European Southern Observatory's Very Large Telescope in Chile and released Feb. 8, 2012. Many previously hidden features, scattered across a spectacular celestial landscape of gas, dust and young stars, have emerged.
(Image: © ESO/T. Preibisch)

The most detailed image yet of the well-known Carina nebula has been caught by a European telescope, unveiling previously hidden features of an exquisite star nursery.

The European Southern Observatory's Very Large Telescope (VLT) spied the cosmic landscape of gas, dust and young stars in the majestic Carina nebula, which is located about 7,500 light-years away from Earth. The lively star nursery lies deep in the heart of the southern Milky Way, in the constellation of Carina (The Keel).

The dynamic star formation that takes place in the Carina nebula gives astronomers an intriguing laboratory to study the birth and early lives of massive stars.

The Carina nebula has been the centerpiece of iconic space images in the past, but many of these photos were taken in visible and submillimeter ranges of the light spectrum.

By harnessing the infrared-seeking capability of the VLT and the infrared HAWK-I camera, a team of European astronomers led by Thomas Preibisch, of the University Observatory in Munich, Germany, peered behind the thick clouds of dust to reveal the Carina nebula's hidden secrets. [New photo and video of the Carina nebula]

In the new image, Eta Carinae appears at the lower left, surrounded by clouds of gas that are glowing under the intense ultraviolet radiation from the newborn stars. The various dark pockets spread across the stellar landscape remain opaque even in infrared wavelengths, but they are dusty incubators from which new stars are forming, ESO officials said.

The cloud of glowing gas and dust is the birthplace of many massive young stars, and the nebula is home to several of the brightest and most massive known stars. One of these stellar giants is Eta Carinae, which is a mysterious and highly unstable star, according to ESO officials. Eta Carinae was the second brightest star in the night sky for several years in the 1840s, and astronomers think it will likely destruct in a violent supernova explosion within a relatively short time.

The bright star grouping close to the center of the picture is a cluster of stars called Trumpler 14. Over the last few million years, this region of the sky has formed large numbers of individual stars and star clusters, according to ESO officials.

The Trumpler 14 cluster can be easily spotted in visible light images, but in this infrared view, many fainter stars can also be detected. Toward the left side of the image, a small concentration of yellowish stars can be seen. This stellar grouping, which cannot be seen in visible light, was spotted for the first time in the new data from the VLT, ESO officials said.

This new panorama of the Carina nebula has been stitched together from hundreds of individual images, creating the most detailed infrared mosaic of the nebula ever taken, ESO officials said in a statement. The VLT's view not only highlights the bright, massive stars, but also hundreds of thousands of fainter stars that were previously masked by the thick veils of dust.