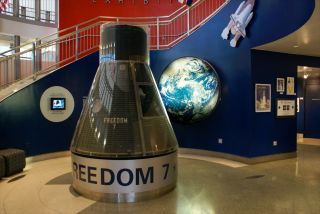 Alan Shepard's Freedom 7 Mercury spacecraft as it is displayed at the Naval Academy in Annapolis, Maryland. The capsule will soon be moving to Boston and then Washington, D.C.
(Image: © heroicrelics.com/Mike Jetzer)

The capsule that launched the first American into space more than 50 years ago will soon be moved from Maryland to Massachusetts, before ultimately landing in Washington, D.C. in 2016.

Freedom 7, the Mercury spacecraft that NASA astronaut Alan Shepard rode on a 15-minute suborbital flight on May 5, 1961, is leaving the U.S. Naval Academy in Annapolis, Md., where it has been on display since December 1998. Shepard, who died earlier that same year, graduated from the academy in 1945.

The Naval Academy announced the spacecraft's pending departure on Jan. 18, promoting the "last chance" for the public to see the capsule on display at its Armel-Leftwich Visitor Center. Freedom 7 is expected to leave Annapolis in late February, according to an academy spokesperson.

On loan from the Smithsonian Institution, the capsule is departing the Naval Academy to be displayed at the John F. Kennedy Presidential Library and Museum at Columbia Point in Boston, Mass.

"A plan for loaning [Freedom 7] to the John F. Kennedy Library in Boston is being developed," the Smithsonian's National Air and Space Museum said in a statement. [Photos: The Flight of Freedom 7]

Less than a month after the flight of Freedom 7, Kennedy challenged the nation to "commit itself to achieving the goal, before this decade is out, of landing a man on the moon and returning him safely to the Earth." Shepard later became the fifth man to walk on the moon.

Freedom 7's arrival at the library will mark the second time a Mercury spacecraft has visited Massachusetts. In 2002, Liberty Bell 7, which followed Freedom 7 into space, was displayed at the Museum of Science in Boston.

Like Liberty Bell 7, the JFK Library's exhibit of Freedom 7 will be temporary.

"The National Air and Space Museum is working on a long range plan for exhibiting the Mercury Freedom 7 capsule," the museum explained in a statement. "The plan includes placement of the artifact in a major new gallery which is expected to open in the museum's Washington building in 2016."

The National Air and Space Museum plans for Freedom 7 to be a part of a "new Apollo gallery for a new generation." Replacing the "Apollo to the Moon" exhibition room, which opened with the museum in 1976, the new gallery "will tell the story of the Mercury, Gemini and Apollo programs, going from nothing to six landings on the Moon in only 14 years — only eight years and two months from Kennedy's challenge to successfully landing."

The new gallery will highlight artifacts from the museum's collection, including Freedom 7, while adding "new content for a whole generation of people who grew up after Apollo was over."

The Air and Space Museum currently displays Friendship 7, the Mercury capsule that launched John Glenn on the United States' first orbital mission in February 1962, in its "Milestones of Flight" gallery. The museum's annex, the Steven F. Udvar-Hazy Center in Virginia, has "Freedom 7 II," the Mercury capsule that Shepard had hoped to fly for his second flight before the mission was canceled.

Three other flown Mercury spacecraft are on loan from the Smithsonian to museums around the country, including the Astronaut Hall of Fame in Florida, Chicago's Museum of Science and Industry in Illinois, and at Space Center Houston in Texas.

The Kansas Cosmosphere and Space Center displays the Liberty Bell 7. In 1999, the museum recovered the sunken spacecraft from the ocean floor.

NASA gave Freedom 7 to the Smithsonian five months after it flew to be the first manned spacecraft added to the National Collection. Prior it going to the Naval Academy in 1998, the capsule was on display at the National Air and Space Museum.