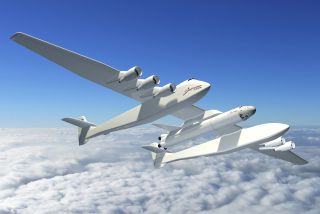 The Huntsville, Ala.-based company Stratolaunch Systems began construction on the new factory on Jan. 20 at the Mojave Air and Space Port in Mojave in California, where the company plans to build the biggest aircraft in history to launch spacecraft into orbit.

"Today marks the start of an exciting journey for us," said Gary Wentz, CEO and President of Stratolaunch Systems, in a statement. "Over the next year, we will have a visible presence in the Antelope Valley with two new facilities and a pair of 747-400 aircraft which will undergo salvage to supply parts and subsystems for integration into our carrier aircraft. We look forward to many years of great work in Mojave."

Stratolaunch's 385 feet-wide (117 meter) carrier plane will carry a multi-stage rocket booster to an altitude of about 30,000 feet (9,100 meters). The rocket booster will then separate from the mothership and launch its a space capsule the rest of the way into orbit. The system is designed to deliver cargo, and eventually humans, to low-Earth orbit.

"This is not a sketch," Scaled Composites founder Rutan said when the venture was unveiled in December. "It exists in hundreds of detailed drawings, and it's relatively close to [being built] as soon as we can get a building big enough."

That new fabrication building will cover 88,000 square feet (8,200 square meters). Nearby, a 92,640 square foot (8,600 square meter) hangar will serve as an assembly and test facility for the aircraft.

To be constructed by Bakersfield-based Wallace and Smith General Contractors, the fabrication facility is scheduled to be complete by late 2012, and the hangar finished by 2013.

Stratolaunch Systems aims to fly its first test flight in 2015, with a first operational launch slated for 2016.