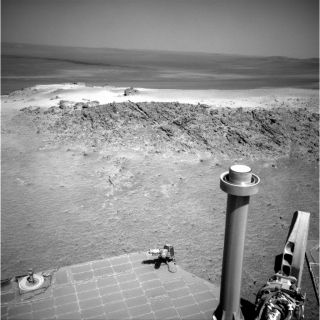 NASA's Mars Exploration Rover Opportunity used its navigation camera to capture this view of a northward-facing outcrop, "Greeley Haven," where the rover will work during its fifth Martian winter. This image, taken by Opportunity on Nov. 29, 2011, was released Jan. 5, 2012.
(Image: © NASA/JPL-Caltech)

After roaming the surface of Mars for nearly eight years, a stalwart NASA rover is allowing scientists to begin investigating the mysterious interior of the Red Planet.

The work is the chief component of the rover Opportunity's winter science campaign on Mars, which is now under way. But instead of drilling deep into the bowels of the planet (which Opportunity is not equipped to do), the rover is sitting quite still and beaming radio signals home to Earth.

By analyzing these signals, researchers hope to get "a handle on the structure of the interior of the planet — the distribution of mass, and perhaps how large the core might be," said John Callas, Opportunity's project manager at NASA's Jet Propulsion Laboratory in Pasadena, Calif.

Waiting out the winter

The golf-cart-size Opportunity landed in Mars' southern hemisphere Jan. 25, 2004, about three weeks after its twin, Spirit, touched down. The two robots were expected to spend 90 days searching for signs of past water activity. [Mars Photos by Spirit and Opportunity]

They found plenty of such evidence at their disparate landing sites, fundamentally reshaping scientists' understanding of the Red Planet and its history. And the two rovers kept chugging along, far exceeding their warranties; NASA declared Spirit dead just last year, and Opportunity is still going strong.

Opportunity arrived at the 14-mile-wide (22 kilometers) Endeavour Crater last August and spent a few months poking along its rim. But with a long and frigid winter looming, Opportunity had to find a good spot on the crater's rim to wait out the weather.

Opportunity rolled into that location, informally called Greeley Haven, about a month ago, Callas said. In that spot (named after a late planetary geology professor), the rover is able to tilt its solar panels northward at about 15 degrees, maximizing the power it can draw from the sun to stay warm, active and healthy.

The measure is necessary this winter because Opportunity's solar panels are heavily coated with dust, researchers have said.

But the rover won't sleep the season away. While relatively stationary, it will investigate the rocks at Greeley Haven, take panoramic photos of its surroundings and — most important — send radio signals back to Earth.

Looking beneath the surface

The mission team will track those signals, using Opportunity's motion relative to Earth as a proxy for the rotation of Mars, Callas said. Scientists should thus be able to get very precise measurements of the planet's spin.

They're particularly interested in learning how Mars' spin axis has changed, or precessed, since NASA's Viking mission made similar measurements back in the mid-1970s. Knowing the precession rate should allow scientists to get a much better handle on the Red Planet's interior structure, Callas said.

Researchers are also keen to study Mars' nutation, which is a smaller-period variation in the planet's rotation. Such information might help reveal whether the Red Planet's core is solid or liquid.

Callas compared the methodology to spinning an egg to see whether it's hard-boiled or raw.

"If it spins freely, you know it's hard-boiled. If it sloshes, you know that it's raw," Callas told SPACE.com. "And planets do the same thing. If they have a fluid core, the planet tends to slosh, and you get this effect we call nutation. If it's a solid core, it's rigid, then that effect is much smaller."

The mission team will be tracking Opportunity's radio signals almost daily. After three to six months, researchers expect to have enough data to start getting an in-depth picture of the Martian interior, Callas said.

The winter solstice in the Martian southern hemisphere comes in late March; afterward, solar energy will be on the rise at Greeley Haven and the rest of Endeavour Crater.

Opportunity should be able to resume its roving by late May or thereabouts — perhaps sooner if a windstorm blows much of the dust off its solar panels, Callas said. Then the six-wheeled robot would head south and explore more of Endeavour Crater.

Despite an arthritic joint in its robotic arm, Opportunity is still in good health, so there's no reason to think it won't hit the ground running. But Callas and the rest of the team take nothing for granted with an 8-year-old rover, even one as accomplished as Opportunity.