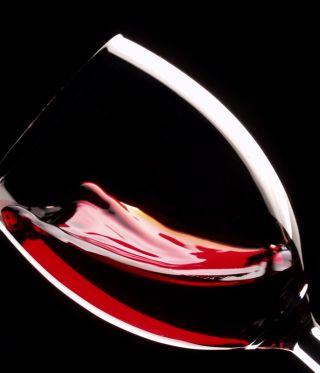 A chemical in red wine could prove beneficial in fighting the health effects of weightlessness.
(Image: © Dreamstime)

Chances are, when you pop open a bottle of Cabernet Sauvignon, you expect to savor certain aromatic flavors, or "notes", depending on the wine: fruit forward, perhaps, with hints of pepper and leathery tannins, and just the faintest whiff of ... meteorite???

At least that's what you'd savor if you were drinking a bottle of Meteorite, possibly the very first wine on the market aged with a meteorite that fell to Earth from space. It's the brainchild of Ian Hutcheon, an Englishman now working in Chile, who thinks the infusion of a bit of meteorite gives his wine a "livelier taste."

ANALYSIS: Is This the World's First Space Beer? No.

What would possess a man to make wine with meteorites? For Hutchinson, it's a natural dovetailing of interests. He owns a local vineyard in Chile's Cachapoal Valley, and has a longstanding interest in astronomy.

He even launched his own observatory in 2007, the Centro Astrononomica Tagua Tagua, currently the only place you can buy Meteorito wine — at least for now. Hutchinson hopes to export the product around the world in the near future.

The meteorite in question, Hutchinson claims, is roughly three inches in diameter, 4.5 billion years old, and likely hails from the asteroid belt between Mars and Jupiter. It crashed in Chile's Atacama Desert some 6,000 year ago.

Technically the meteorite belongs to "an American collector," who didn't seem to mind having his priceless piece of space rock marinate in a wooden barrel of red wine for 12 months.

That's how long it took to complete something called "malolactic fermentation": it's a process that takes place after the primary fermentation. The first stage of the wine-making process — after harvesting the grapes, that is, which in this case come from Hutchinson's Tremonte Vineyard southwest of Santiago — converts grape sugar into alcohol via yeast. This takes around 25 days.

The next stage, malolactic fermentation, is achieved by lactic acid bacteria, notably Oenococcus oeni. There are others, of course, but the Aroma Dictionary informs me that this bacteria in particular "typically processes substances that have pleasant and wine sympathetic aromas and flavors." And those flavors are imparted to the wine as it ages in a wooden barrel.

(Here's an extra bit of wine making trivia, just for fun. Malolactic fermentation is generally reserved for dry white wines and "full-bodied" dry red wines; it can ruin your average Riesling. And you don't want those little bacteria to keep fermenting once the wine has been bottled, lest it smell — and taste — a bit like cured meat when it's opened.)

So now, in addition to space beer, astronomy buffs have their very own brand of wine. "When you drink this wine, you are drinking elements from the birth of the solar system," Hutchinson said, adding that he wanted "to give everybody the opportunity to touch something from space: the very history of the solar system, and feel it via a grand wine."