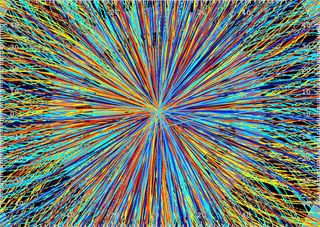 Scientists think they are getting closer to finding the Higgs boson particle, as they speed particles around the Large Hadron Collider at near light-speed. Here, the lines represent possible paths of particles produced by collisions in the detector, as part of the ALICE experiment.
(Image: © CERN)

Scientists at the Swiss lab that hosts the world's largest atom smasher, the Large Hadron Collider (LHC), will announce their latest findings in the search for an elusive subatomic particle called the Higgs boson or "God particle," next week. Already blogs and online news outlets are abuzz with speculation about the big announcement.

The CERN lab in Geneva has cautioned that LHC's ATLAS and CMS experiments have not accrued enough data to make any conclusive statement on the existence or non-existence of the Higgs boson, an as yet undetected particle thought to give all other particles their mass.

Even so, the BBC is reporting that a "respected scientist from the CERN particle physics laboratory has told the BBC he expects to see 'the first glimpse' of the Higgs boson next week."

The LHC is a 17-mile (27-kilometer) long underground circular tunnel where particles are smashed into one another at near light speed. The collisions produce enormous amounts of energy, releasing various exotic particles that may include the Higgs boson.

Detecting the Higgs boson would be huge, physicists say, because particles with mass are an integral component of the physical world. The particle's ability to explain so much about the universe earned it the moniker, at least among the public, of the "God particle." [Twisted Physics: 7 Mind-Blowing Findings]

The particle is thought to have a mass of between 114 and 185 gigaelectronvolts, or GeVs. (One GeV is equivalent to the mass of a proton, the positively charged particle in the nucleus of an atom.)

Tantalizing data spikes between 120 and 140 GeV suggest that the Higgs mass might lie in that range, the LHC teams reported in July. However, the data at that stage was not reliable enough to make any scientific claims, and could simply represent statistical glitches, the scientists said.

Before that presentation, in April 2011, a leaked note from one of the teams suggested that a Higgs boson announcement might be forthcoming. Yet there has still been no definitive word on the Higgs from LHC or elsewhere.

Since then, the teams have been collecting more and more observations of what's called events, when particles collide. Here's how CERN scientists describe the importance of more data:

"Imagine that all selected events were like the contents of a small lake," they wrote on a physics blog called Quantum Diaries. "If a hidden fish creates a disturbance underneath, we will see a wave on a calm water surface. But of course, if there is some wind, ripples would appear, making it harder to spot the wave caused by a fish. The presence of a Higgs boson would do just that: appear like a wave on top of the calm water. As with the wind, the background creates small ripples one could easily mistake for a signal. The background can also fluctuate following statistical laws, like a random wind. In our case, having more data is equivalent to having more fish in the same spot, making their presence easier to detect."

Many hope the impending presentation will be a big announcement resulting from a sufficient accumulation of data, though so far CERN is keeping a buttoned lip if that's the case.

This story was provided by LiveScience, sister site to SPACE.com. Follow LiveScience for the latest in science news and discoveries on Twitter @livescience and on Facebook.