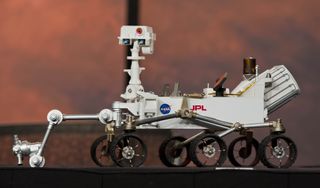 A model of the Curiosity Mars rover, NASA's most advanced mobile robotic laboratory, is seen prior to a news briefing. Similar models are not (yet) available to the public.
(Image: © NASA/Paul Alers)

In the days leading to the launch of NASA's new Mars rover, the Mars Science Laboratory (MSL), space agency officials have used a scale model of the car-size rover to show how the six-wheeled spacecraft works. And near the launch site at the visitor center where the public will gather on Saturday (Nov. 26) to watch the liftoff, a toy model of the rover is on display.

But those hoping to go home with their own miniature MSL rover as a memento or as a means to engage their kids in the mission are out of luck.

If there ever was a NASA rover that has lent itself more to being a toy — but is not one — it is NASA's MSL, named Curiosity. [Photos: Last Look at Curiosity Rover]

“Kids! Do you dream of exploring the surface of Mars? Do you like rockets? Lasers? Big wheels? Then do we have the toy for you! Introducing Curiosity, the ultimate Martian hot rod! Rocker-bogie six-wheel drive! Laser-shooting eye! Rocket-powered sky crane! You heard right, sky crane!”

Of course, no ad is complete without the fine print:

“Requires (1) radioactive battery (MMRTG, or multi-mission radioisotope thermoelectric generator), not included. Not available in any store.”

Previous NASA rovers have all been celebrated in toy and model form well before they touched down on the Martian surface, if not also before they left the Earth. The space agency's 1997 Pathfinder mission with its Sojourner rover had its very own Mattel Hot Wheels "Action Pack." Spirit and Opportunity, the twin Mars Exploration Rovers that landed in 2004, were sold as LEGO sets and modeled as die-cast and plastic miniatures.

MSL will take approximately eight months to reach Mars — Curiosity is scheduled to make a soft touchdown using cables lowering it from a rocket-powered descent stage (the aforementioned sky crane) on Aug. 6, 2012 — which means there's still time for models to land in stores before the real rover reaches the red planet. The Jet Propulsion Laboratory (JPL), which manages the mission for NASA, says they are unaware, however, of any planned toys.

LEGO, the Denmark-based toy company, assembled MSL models from its Mindstorms NXT robotics kits for a "Build the Future" display at the Kennedy Space Center Visitor Complex in Florida. The custom replicas and MSL launch event are part of an educational collaboration with NASA aimed at inspiring students to consider careers in science and engineering.

According to a LEGO spokesperson, the company has no plans to offer the block-built rovers as a commercial set.

Of course, that doesn't stop someone from building his own MSL from LEGO bricks — especially if that someone helped build the real Curiosity, too.

Stephen Pakbaz, an engineer who was involved in some of the design and testing of the actual MSL spacecraft at JPL, did just that — recreating the rover in 1:20 scale.

He said the experience working on the real rover "made it easier to make an accurate LEGO model."

Pakbaz's brick-built Curiosity features an articulated arm, deployable mast, and a working rocker-bogie suspension system that allows the rover to keep all six wheels on the ground and climb over rocks twice their height.

In addition to publishing online photos and even a video of his mini MSL traversing a test ramp (which he also made from LEGO), Pakbaz submitted his model to CUUSOO, a website where the public can vote for fan-created LEGO sets. If 10,000 or more people cast their support behind a particular model, LEGO says it will consider producing it as a commercial model.