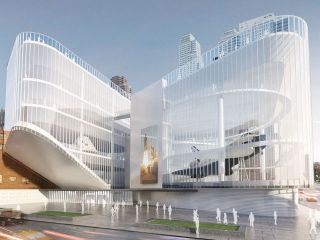 NASA's space shuttle Enterprise will land next summer on the flight deck of the Intrepid Sea, Air and Space Museum in New York City. The World War II aircraft-carrier-turned-museum took over ownership of the prototype winged orbiter on Tuesday (Nov. 22) in preparation for Enterprise's delivery in 2012.

NASA's Lynn Cline, the deputy associate administrator for human exploration and operations, turned over the title for Enterprise to Intrepid president Susan Marenoff-Zausner. The contract signing was publicly announced only after it was done, unlike the high-profile title-signing ceremony that was held last month to transfer shuttle Endeavour to the California Science Center in Los Angeles.

"NASA is proud to transfer the title of space shuttle Enterprise to the Intrepid Sea, Air and Space Museum in New York City," NASA Administrator Charles Bolden said in a written statement released by the museum. "The USS Intrepid had a rich history with NASA's mission, and Enterprise — the pathfinder for the space shuttle program — belongs in this historic setting."

"Enterprise, along with the rest of our shuttle fleet, is a national treasure," Bolden said, "and it will help inspire the next generation of explorers as we begin our next chapter of space exploration."

Enterprise, which didn't fly in space but instead performed atmospheric approach and landing tests in the late 1970s, is one of four retired shuttle orbiters NASA is providing to museums for public display. In addition to Endeavour, the space agency gave Atlantis to the Kennedy Space Center Visitor Complex in Florida and donated Discovery to the Smithsonian Institution.

NASA originally transferred Enterprise to the Smithsonian in 1985 and the Washington institution owned the test orbiter until earlier this year. Today, it continues to house Enterprise at the National Air and Space Museum Steven F. Udvar-Hazy Center in northern Virginia. [Photos: A Space Shuttle Called 'Enterprise']

Enterprise will depart for New York after Discovery arrives at the Udvar-Hazy Center to take its place, an event that's currently targeted for April 2012. NASA will ferry Enterprise on top of its modified Boeing 747 carrier aircraft to Manhattan, where it will land and be offloaded by crane at the John F. Kennedy (JFK) International Airport.

The Intrepid originally planned to leave Enterprise at the airport inside a temporary, climate-controlled tent within a hangar while it readied a more permanent display home for the shuttle.

Initial plans called for a glass hangar to be constructed on Manhattan's Pier 86, next to where the aircraft carrier is moored along the Hudson River. Then in late September, the Intrepid announced it had instead decided to construct a much larger museum and educational center, although the land where it wants to build — an empty lot across the street from the museum — is state property that needs to be rezoned if it is to be Enterprise's new home.

The change in display plans caused some politicians and members of the public from locations that did not receive an orbiter to cry foul. Congressional representatives and public petitions called for Enterprise to be reassigned to other museums in cities like Seattle, Houston and Dayton, Ohio.

Now the orbiter's rightful owner, Intrepid announced that a few months after touching down in New York, Enterprise will be loaded onto a barge and ferried around the city to the museum. There it will be hoisted onto the flight deck and displayed under a "protective covering" until the new exhibition hall is ready.

It was not yet clear how many, if any, of the almost two dozen aircraft currently displayed on Intrepid's flight deck would need to be moved.

The public will be able to view Enterprise on the Intrepid beginning in summer 2012.

Continue reading at collectSPACE.com about what space shuttle Enterprise brings to New York City and to New Yorkers.