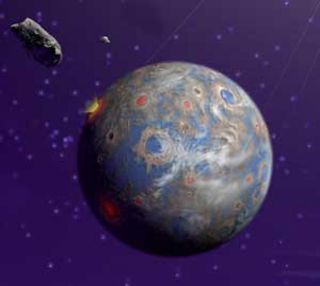 An artist's concept of an Earth-like planet orbiting another star.
(Image: © NASA/JPL)

When searching for alien planets that could host extraterrestrial life, scientists should broaden their minds beyond "Earth-like planets," researchers say.

To date, more than 700 alien planets have been discovered beyond our solar system, and scientists are eager to know if any of them harbor life. In a new study, astrobiologists propose two new planetary rating systems that could make it easier to denote potentially habitable worlds.

One of the new scales, called the Earth Similarity Index (ESI), would take the traditional tack and categorize a planet's likeness to our own. This makes sense, the researchers say, because Earth is still the only known planet to host life, so other worlds that resemble Earth are good bets in the search for extraterrestrials.

"As a practical matter, interest in exoplanets is going to focus initially on the search for terrestrial, Earth-like planets," explained study leader, Dirk Schulze-Makuch, an astrobiologist at Washington State University, in a statement. "With that in mind, we propose an Earth Similarity Index which provides a quick screening tool with which to detect exoplanets most similar to Earth."

But the researchers also propose a second scale, called the Planetary Habitability Index (PHI), which would take into account a range of chemical and physical parameters thought to be conducive to life in more extreme conditions not found on Earth.

"Our proposed PHI is informed by chemical and physical parameters that are conducive to life in general," Schulze-Makuch and his colleagues write in a paper published in the journal Astrobiology. "It relies on factors that, in principle, could be detected at the distance of exoplanets from Earth, given currently planned future (space) instrumentation.”

Limiting the search for life to planets that share a lot in common with Earth potentially restricts the field too narrowly, the researchers argue.

"Habitability in a wider sense is not necessarily restricted to water as a solvent or to a planet circling a star," the paper’s authors write. "For example, the hydrocarbon lakes on Titan could host a different form of life. Analog studies in hydrocarbon environments on Earth, in fact, clearly indicate that these environments are habitable in principle. Orphan planets wandering free of any central star could likewise conceivably feature conditions suitable for some form of life."