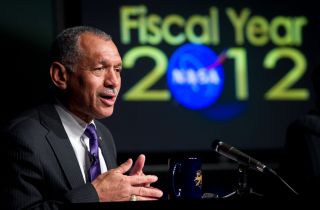 NASA is on track with its goals for future space exploration, including the development of a new rocket and spacecraft designed to take astronauts to asteroids and Mars, the agency's administrator told lawmakers today (Nov. 17).

NASA chief Charles Bolden testified before the U.S. Senate Subcommittee on Science and Space today to discuss NASA's human spaceflight ambitions and its work to turn them into a reality.

"Contrary to popular belief, this has been an incredible year for NASA," Bolden said.

He pointed to the completion of the International Space Station, the burgeoning commercial space sector that will assume the responsibility of taking cargo and eventually astronauts to the orbiting outpost, and the concurrent development within NASA of a new heavy-lift rocket and space capsule designed to explore farther out in the solar system, as indicators that NASA's future is vibrant despite the tough economic times.

Bolden listed these three areas as the agency's key priorities for the future. NASA retired its 30-year space shuttle program in July to focus instead on manned exploration beyond low-Earth orbit.

The transition left a gap in U.S. human spaceflight capabilities, and the agency is currently relying on Russian rockets to take astronauts to and from the space station until U.S. commercial services become available.

In the meantime, NASA is also moving ahead with the development of its Space Launch System and Orion Multi-Purpose Crew Vehicle. The booster and space capsule are being designed to carry astronauts on future missions to an asteroid and Mars. The design of the MPCV capsule is based on plans for NASA's Orion spacecraft, which was originally part of the now-defunct Constellation program to return astronauts to the moon. [Gallery: NASA's Space Launch System]

Bolden said incremental tests have already been completed for the $10 billion Space Launch System. Most recently, NASA successfully test-fired a huge upper-stage rocket engine, called the J-2X, on Nov. 9 at the Stennis Space Center in Mississippi.

The agency is aiming to complete an unmanned test flight of the MPCV capsule by 2014.

The NASA administrator also spoke about the challenges of working within such a difficult fiscal climate, particularly without the benefit of a clearly established budget. Like many other federal agencies, NASA has been forced to trim costs across a wide variety of programs.

"When I talk about prioritization, that is exactly what we're doing," Bolden said. "There are science imperatives that we have to be able to satisfy if we're going to go to Mars. There's no capability we can drop off the table. How do we accomplish the critical goals and objectives, but do it with less?"

Yet, Bolden expressed optimism that NASA is on track, with a manned mission to the Red Planet firmly in its sight.

"I think people are excited about space," Bolden said. "We are putting in place a capabilities-driven program because we have decided that our ultimate destination for humans is Mars."

And, in an indication that NASA is committed to its goals for human spaceflight, the agency recently started accepting applications for its next astronaut class.

"I don't recruit astronauts if I don't intend to fly them," Bolden said.