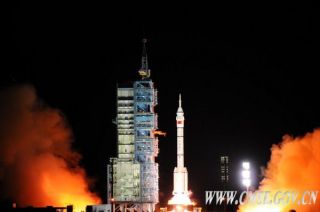 China's robotic Shenzhou 8 launches on Oct. 31, 2011, on a mission to chase down and dock with the prototype space lab Tiangong 1.
(Image: © China Manned Space Engineering)

While China and the United States don't see eye to eye on many issues, there is room for the two nations to work together in space science and exploration, NASA chief Charlie Bolden says.

In fact, cooperation in the space arena could help bridge the divide between the two superpowers while potentially benefiting both, Bolden told a House Foreign Affairs subcommittee on Capitol Hill yesterday (Nov. 2).

"Some level of engagement with China in space-related areas in the future can form the basis for dialogue and cooperation in a manner that is consistent with the national interests of both our countries, when based on the principles of transparency, reciprocity and mutual benefit," Bolden said in testimony before the subcommittee on oversight and investigations.

Bolden's remarks came on a big day for the Chinese space program, as the nation pulled off its first-ever orbital docking between two spacecraft. The meet-up between the unmanned Shenzhou 8 and Tiangong 1 vessels is seen as a milestone in China's quest to build a space station by 2020. [Shenzhou 8: Photos From China's 1st Space Docking Test]

NASA and China in space

Cooperation between NASA and the Chinese space program is currently minimal. A provision inserted into the 2011 budget resolution by Rep. Frank Wolf (R-Virginia) bars the use of federal funds to conduct bilateral science exchanges with China.

Wolf also spoke at yesterday's hearing, reiterating his support for the ban and the reasoning behind it. It doesn't make sense for the United States to assist China's technological development, he said, given Beijing's poor human rights record and its potential aspirations of global military supremacy.

"I have been very troubled by this administration's apparent eagerness to work with China on its space program and willingness to share other sensitive technologies," Wolf said. "I want to be clear: The United States has no business cooperating with the People's Liberation Army to help develop its space program."

If the United States wants to be on the right side of history, Wolf said, it will not aid or encourage the Chinese regime in any way.

"There will come a day when the Chinese communist government will fall — repressive, totalitarian regimes always do," Wolf said. "And when that day comes, books will be written about who helped sustain this government in their final days. Will U.S. companies feature in that narrative? Will the U.S. government?"

Bolden stressed that NASA would continue to abide by the non-cooperation law. But he said he'd be in favor of some carefully controlled exchange with China, as spaceflight and space exploration have become increasingly collaborative enterprises.

Meaningful collaboration can occur even between two countries widely regarded as enemies, Bolden said. After all, the U.S. and Soviet space programs worked together during the Cold War, beginning with a joint spaceflight in 1975 called the Apollo-Soyuz Test Project.

Such engagement with other nations has generally advanced American capabilities in space, Bolden said.

The NASA administrator was not alone in supporting some level of cooperation with China in science and space. John Holdren, director of the White House Office of Science and Technology Policy, voiced similar sentiments at the hearing.

"The notion that China intends to compete with us does not mean that the solution is to disengage with them," Holdren said. "The solution is intelligent engagement — measured, focused, appropriately managed, so that we get the benefits for our own innovation system."

He also evoked the United States' Cold War cooperation with the Soviet Union.