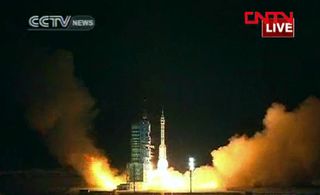 China's unmanned Shenzhou 8 spacecraft launches on Oct. 31, 2011, on a mission to dock with the prototype space module Tiangong 1.
(Image: © CCTV)

China successfully launched its first-ever docking mission today (Oct. 31), lofting to orbit an unmanned vehicle to test out technologies that could help the nation build a space station by 2020.

The Shenzhou 8 spacecraft blasted off atop a Chinese Long March 2F rocket at 5:58 p.m. EDT today (2:58 p.m. PDT, and 5:58 a.m. local time on Nov. 1) from the Jiuquan Satellite Launch Center in Inner Mongolia. Everything apparently went smoothly; Shenzhou 8 entered its initial orbit about 20 minutes after liftoff, and its power-generating solar panels opened on schedule, according to the Chinese state news agency Xinhua.

In the next two days, Shenzhou 8 is slated to rendezvous with the robotic Tiangong 1 space module, which has been orbiting Earth for a month. The meet-up between Shenzhou 8 and Tiangong 1 will be China's first in-space docking — a significant achievement in itself, but also a major step toward much bigger accomplishments in the future. [Shenzhou 8: Photos From China's 1st Space Docking Mission]

"The mastering of rendezvous and docking technologies will lay a key technical foundation for China's building of space station and deep-space exploration," Zhou Jianping, chief designer of China's manned space program, told Xinhua. "It will make it possible for China to carry out space exploration of larger scale."

If all goes according to plan, Shenzhou 8 will dock with Tiangong 1 within two days, Chinese aerospace officials have said. They've already begun preparing Tiangong 1 for its cosmic date.

While Shenzhou 8's main mission is locating and latching onto its orbiting partner, the newly launched spacecraft also has some subsidiary science aims.

Shenzhou 8 is carrying a joint Chinese-German payload, for instance, that will test the effects of microgravity on various biological specimens, including plants, nematodes, bacteria and human cancer cells.

These samples will be exposed to microgravity and space radiation for about three weeks, officials have said. The project marks the first time China has ever collaborated with another nation on one of its Shenzhou missions.

China hopes the Shenzhou 8 rendezvous mission is just one milestone among many as it ramps up its human spaceflight capabilities.

The nation wants to have a manned space station up and running by 2020 or so, for example. To that end, China plans to launch two more Shenzhou docking missions to Tiangong 1 before the end of 2012. At least one of those missions — which are known as Shenzhou 9 and Shenzhou 10 — should be manned, officials have said.

China is only the third country, after Russia and the United States, to develop spacecraft capable of flying humans to and from space. China's first human spaceflight launched a single astronaut in 2003, with two-man and three-man spaceflights following in 2005 and 2008.

While the prospect of a more space-savvy China makes some in the West nervous, the nation says its goals are rooted in science and exploration, not a desire for military superiority. China welcomes international collaboration in space, officials said.

"We shall open our space station to the world to create a platform of scientific research for Chinese scientists and their peers from all over the world," Zhou told Xinhua. "The new knowledge obtained through space science research should be common wealth for human beings and should benefit the whole world."