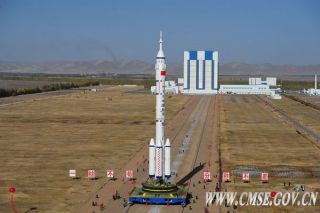 When China launches its Shenzhou 8 spacecraft on an unmanned docking test flight today, a German-Chinese science payload will be along for the ride, marking the first time China has ever collaborated with another country on one of its Shenzhou missions.

China's Shenzhou 8 spacecraft is due to launch atop a Chinese Long March 2F rocket Oct. 31 at 5:58 p.m. EDT (5:58 a.m. local time on Nov. 1) from the Jiuquan Satellite Launch Center in Inner Mongolia.

Two days after the liftoff, Shenzhou 8 will dock with China's Tiangong 1 spacecraft, which was launched in September. It will be the nation's first in-space docking.

Packed aboard Shenzhou 8 is a unit called SIMBOX (Science in Microgravity Box), a joint Chinese-German research unit that weighs 55 pounds (25 kilograms). The box contains 40 experimental units, each about the size of a cell phone, designed to test the effects of microgravity on various specimens.

Plants, nematodes, bacteria and human cancer cells are just some of the samples that will be exposed to zero gravity and space radiation for nearly three weeks. The research will investigate fundamental biological and medical questions, including how gravity intervenes in biological processes, and how the immune system can be strengthened.

The German portion of the project is managed by the German Aerospace Center (Germany's space agency), while the China Manned Space Engineering Office has coordinated the Chinese contribution to SIMBOX.

The docking maneuver between Shenzhou 8 and Tiangong 1 is seen as a significant step for China's space program, which aims to eventually build its own manned space station in orbit. Autonomous docking is a necessary skill to achieve that that goal.

China is only the third country, after Russia and the United States, to develop spacecraft capable of flying humans to and from space. The country's first human spaceflight launched a single astronaut in 2003, with two-man and three-man spaceflights following in 2005 and 2008.

If the Shenzhou 8 docking is a success, it will be followed by another robotic rendezvous with Shenzhou 9, to launch next year, and then a crewed docking with Shenzhou 10, Chinese space officials have said.