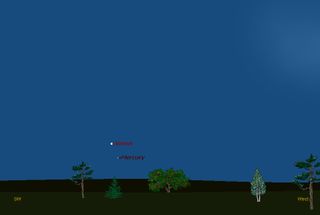 This sky map depicts the location of planets Venus and Mercury just after sunset in Oct. 24, 2011 as viewed from mid-northern latitudes. Venus will steadily rise higher in the sky as the northern autumn season progresses.
(Image: © Starry Night Software)

After an absence of just over a year, the "evening star" is about to reappear.

Venus passed behind the sun, as seen from Earth, back on August 18 in what's known as superior conjunction. Since then, it has been invisible, mired deep in the brilliant glare of the sun.

Nonetheless, with each passing day, it has been moving on a slow course toward the east and pulling slowly away from the sun's general vicinity.  Finally, during this week, the planet Venus should emerge as an evening "star" very low in the western twilight.

On Monday evening (Oct. 24), it sets about 23 degrees south of due west (10 degrees is roughly equal to the width of your fist held at arm's length) about 50 minutes after sunset. The sky map of Venus available here shows the planet low in the southwestern sky.

Only ambitious, skilled observers may spot the planet then, but by Oct. 30 this will have improved slightly to 55 minutes, giving less experienced skywatchers a fighting chance to get their first glimpse.

Here is a challenge to all skywatchers: On Thursday evening (Oct. 27) scan with binoculars for the planet Mercury a couple of degrees below Venus, with the two planets hanging a few degrees above the west-southwestern horizon about 30 minutes after sunset.

Situated below and to the right of the two planets this evening is a very thin crescent moon, only about 26 hours past new phase. You'll improve your chances of seeing it using binoculars.  [Photos of Venus, the Mysterious Planet Next Door]

Of magnitude -0.3, Mercury should be visible as a naked-eye object for the southernmost United States, where it will set nearly an hour after the sun. For observers at the equator, Mercury will set as twilight ends, while for Southern Hemisphere observers — in contrast with those who are north of the equator — Mercury puts on an excellent evening showing.

Continuing to swing east of the sun during November, Venus will soon become plainly visible in the west-southwest evening sky, even to the most casual of observers.

Appearing as a brilliant white starlike object of magnitude –3.9, our sister planet will set at least an hour after the sun by Nov. 3. It slowly rises higher each evening to adorn the western evening sky all during the upcoming winter and early spring. By New Year's Day, it will set as late as 2 1/2 hours after the sun.

Venus reaches its greatest elongation — its greatest angular distance — 46 degrees to the east of the sun on March 26. From then, on into mid-April, it will be setting more than four hours after the sun. It is brightest in mid spring as it heads back down toward the sun, reaching its greatest brilliancy for this apparition on April 30 at magnitude –4.5.

Venus, in fact, will be so bright at this stage of the game that it can be easily perceived with the naked eye in a deep blue, haze-free afternoon sky. After twilight ends, from a really dark site, it will be capable of casting faint yet distinct shadows.

Between now and next May, repeated observation of Venus with a small telescope will show the complete range of its phases and disk sizes.

By the last week of March, Venus reaches dichotomy (displaying a "half moon" shape). Then, for the rest of the spring it displays a large crescent as it swings near the Earth.

Indeed, those using telescopes will note that while the Earth-Venus distance is lessening, the apparent size of Venus' disk will grow, doubling from its present size by March 15. When it has doubled again in size on May 7, its large crescent shape should be easily discernable even in steadily held 7-power binoculars.

As May progresses, our bright sister planet will get rapidly lower in the twilight, soon to disappear. Venus will actually start the month almost 40 degrees high in the west at sunset, but will plummet to a sunset altitude of only around 7 degrees by month's end (for midnorthern latitudes).

Venus then quickly fades, vanishing from completely from view during the opening days of June. The stage will then be set for the exceedingly rare spectacle of Venus appearing to cross in front of the sun — called a "transit" — at its June 5 inferior conjunction.

During the third week of June Venus reemerges as a "morning star" appearing just above the east-northeast horizon. Climbing progressively higher each morning, Venus will then shine very prominently in the morning sky right on through the late fall of 2012.