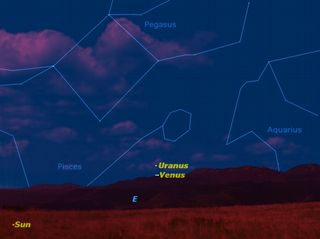 The planets Uranus and Venus will be in close conjunction on the morning of April 23, 2011.
(Image: © Starry Night Software)

On the morning of Saturday, April 23, skywatchers will have an unusual opportunity to spot the planet Uranus, because it will be located very close to the brilliant planet Venus in the dawn sky.

You can easily spot Venus as the brightest object in the sky just before sunrise, but it will be better to be up a little earlier just as Venus clears the eastern horizon, so that the sky will be as dark as possible. This will help you to spot tiny Uranus, just within range of the naked eye under perfect conditions, but most of the time requiring binoculars or a small telescope to spot.

This sky map of Venus and Uranus shows how they will appear at dawn on Saturday.

On Saturday morning, Uranus will be slightly less than a degree (two moon widths) directly above Venus (in the northern hemisphere). It will appear at magnitude +5.9 compared to Venus’ magnitude –3.9, a difference of 9.8 magnitudes.

This means that, because the magnitude scale is logarithmic, Venus will be nearly 10,000 times brighter than Uranus. [April 2011 Skywatching Events]

In reality the two planets will be nearly 20 astronomical units (the distance between the Earth and sun) apart, but in Earth’s sky they will appear only 1 degree apart. The two planets will be very low in the eastern sky and will be difficult to see in morning twilight. You will need a very low eastern horizon. Small binoculars will be almost essential to spot Uranus. Use much brighter Venus to locate dim Uranus. [Infographic: Uranus]

To ancient astrologers, such conjunctions were fraught with ominous significance. To modern astronomers, they are merely a pretty sight, a photo opportunity, though this conjunction will be a difficult one to photograph because of the extreme difference in brightness.

This is the second of a series of close encounters between six planets in the morning sky over the next two months. Only Saturn won’t participate in the dawn dance, since it is currently dominating the evening sky.

Here is a run-down of upcoming conjunctions:

These conjunctions offer many opportunities for beautiful photographs with ordinary cameras. Use your lens at its longest telephoto setting, underexpose slightly to bring out the colors of the dawn sky, and try to frame the planets with the silhouettes of foreground objects.