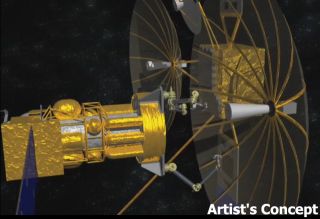 Artist's impression of a servicing satellite (left) — to be developed under the U.S. military's Phoenix program — preparing to remove a still-functioning antenna from a defunct satellite (right) in geosynchronous orbit.
(Image: © DARPA)

The United States Department of Defense is looking for ways to repurpose space junk thousands of miles above Earth back into valuable satellite parts, or even completely new spacecraft.

The military's Defense Advanced Research Projects Agency (DARPA) has started a program called Phoenix, which seeks to recycle still-functioning pieces of defunct satellites and incorporate them into new space systems on the cheap.

The Phoenix program aims to use a robot mechanic-like vehicle to snag still-working antennas from the many retired and dead satellites in geosynchronous orbit — about 22,000 miles (35,406 kilometers) above Earth — and attach them to smaller "satlets," or nanosatellites, launched from Earth.

Space debris — an accumulation of defunct satellites, spent rocket stages and other junk in orbit — has become a huge problem. There is so much junk up there that collisions among debris pieces could start to increase exponentially, leading to an ever-growing mound of rubble in orbit, a recent report from the U.S. National Research Council warned. [Photos: Space Debris Images & Cleanup Concepts]

How it would work

If it works, Phoenix could save the military a lot of money on launch costs, DARPA officials said. Antennas are big and bulky, requiring a lot of fuel to get off the ground, while lofting the antenna-less "satlets" would be much cheaper.

The Phoenix program envisions launching a "tender" vehicle, the mechanic-like satellite servicing system, into geosynchronous orbit. The tender would be equipped with grasping mechanical arms and remote vision systems. The satlets would then be launched separately as extra payloads hitching rides into space aboard other satellites.

The tender vehicle would cruise over to a satlet, pluck it out of its housing and ferry it to the appropriate defunct satellite. The tender would then switch the antenna over from the retired satellite to the satlet, creating a "new," and relatively cheap, satellite using previously useless space junk.

Phoenix will require the development of new technologies, DARPA officials said, calling on the expertise of scientists and engineers in many fields.

"Satellites in GEO are not designed to be disassembled or repaired, so it's not a matter of simply removing some nuts and bolts," said David Barnhart, DARPA's Phoenix program manager. "This requires new remote imaging and robotics technology and special tools to grip, cut, and modify complex systems, since existing joints are usually molded or welded."

The Phoenix program can look to some ground-based tech as a starting point, officials said. For example, it may incorporate elements of today's telerobotics systems that allow doctors to perform surgery on patients thousands of miles away, as well as advanced remote imaging systems that enable oil drillers to view the ocean floor thousands of feet underwater.

But these capabilities would need to be re-engineered to operate in space, to meet the challenges imposed by the microgravity, high-vacuum and harsh-radiation environment of space.

The Phoenix program is also specifically looking for technologies to help develop a new class of satlets that can be launched more economically to geosynchronous orbit via existing ride-along services with commercial satellites, DARPA officials said. The agency plans to host two industry days next month for scientists and engineers interested in pitching ideas for the Phoenix program, they added.