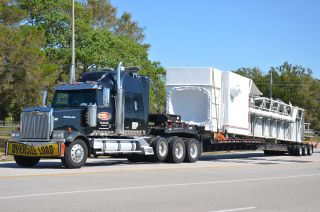 The orbiter access arm and white room from Kennedy Space Center's Launch Pad 39B in Florida pulled up to the Johnson Space Center in Houston, Texas on Oct. 18., 2011, where it will be placed on public display.
(Image: © collectSPACE.com)

HOUSTON — An iconic metal walkway and entrance room used for two decades by more than 50 astronaut crews to enter space shuttles atop the launch pad arrived at NASA's Johnson Space Center on Tuesday (Oct. 18), where they are to go on public display.

The 65-foot (20-meter) long orbiter access arm and its integrated "white room," an environmentally-controlled chamber, arrived here from the Kennedy Space Center in Florida by truck. The arm was detached from Launch Pad 39B in June 2009 after decades perched 147 feet (45 meters) above the pad's surface to span the gap between the fixed service structure, or launch tower, and a shuttle’s entry hatch.

The arm and its white room was just one of two major components from Pad 39B that were removed intact and set aside prior to a demolition team removing the pad's historic service structures to prepare the facility to launch future rockets. That deconstruction work was completed last month when NASA certified the pad as "clean." [Gallery: Shuttle Launch Pad Parts Arrive in Houston ]

The arm and its white room was used for two decades between 1986 and 2006, supporting 53 shuttle missions.

Tragically, the first astronauts to use the walkway to board a shuttle for launch took their last steps on Earth while walking across it. The seven STS-51L crew members, including teacher Christa McAuliffe, were the first space shuttle crew to launch from Pad 39B on Jan. 28, 1986. Seventy-three seconds after liftoff, shuttle Challenger broke apart, ultimately claiming the astronauts' lives.

The same bridge helped support the shuttle's return to flight after the Challenger accident. The STS-26 crew used Pad 39B's orbiter access arm and white room to board shuttle Discovery for their safe trip to space two years after the tragedy.

Fifty more crews crossed the orbiter access room and climbed into their shuttles through the same white room until December 2006, when the STS-116 astronauts became the 53rd and final crew to launch from that pad.

The space shuttle program formally ended this past August after 135 missions in total. Much of the program's hardware, including the remaining three orbiters, are now in the early stages of being moved to museums, science centers and NASA visitor complexes across the nation for public display.

The Pad 39B orbiter access arm and white room will be on exhibit beginning this weekend during Johnson Space Center's annual open house and Ballunar Liftoff Festival, a hot air balloon exhibition. The gantry pieces will eventually be moved to their permanent exhibit at Space Center Houston, which serves as the center's official visitor complex. [NASA's Space Shuttle Program In Pictures: A Tribute ]

Space Center Houston has confirmed it is developing an 8,000 sq. foot facility to house the access arm and white room, in addition to other key shuttle program artifacts. The center was not chosen to receive one of NASA's shuttle orbiters but the Explorer, a full-scale mockup, will be transferred from the Kennedy Space Center Visitor Complex to give Houston visitors the chance to explore the inside of a full size shuttle.

A twin to 39B's orbiter access arm and white room remains installed on Kennedy Space Center's Launch Pad 39A, which may be used in support of NASA's next generation heavy-lift rocket, the partially-shuttle-hardware-derived Space Launch System.

Access arms and white rooms used during the earlier two-man Gemini and Apollo moon programs are exhibited at museums including Kennedy's Visitor Complex, the Air Force Space and Missile Museum at Cape Canaveral and at the Kansas Cosmosphere in Hutchinson, Kansas.

Continue to collectSPACE.com  to see more photographs of the Launch Pad 39B orbiter access arm and white room arriving at Johnson Space Center in Houston.