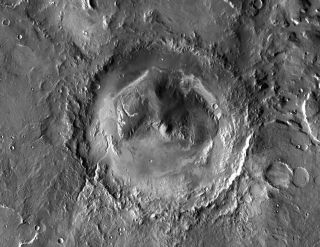 A giant crater on Mars destined to be the stomping ground for NASA's next rover could provide a treasure trove of intriguing science finds, researchers say.

NASA's car-size, $2.5 billion Mars Science Laboratory (MSL) rover, also known as Curiosity, is slated to blast off in late November and arrive at the Red Planet in August 2012. It'll touch down near the foot of a 3-mile (5-kilometer) high mountain in a massive crater called Gale.

Curiosity's traverses around Gale Crater and its central mountain should reveal a great deal about Martian history and the planet's past potential to host life, scientists say. [Photos of Gale Crater]

"This may be one of the thickest exposed sections of layered sedimentary rocks in the solar system," said Joy Crisp, MSL deputy project scientist from NASA's Jet Propulsion Laboratory (JPL) in Pasadena, Calif., in a statement. "The rock record preserved in those layers holds stories that are billions of years old — stories about whether, when and for how long Mars might have been habitable."

The surface of Mars today does not seem hospitable to life as we know it; it's a barren, cold and dry place bombarded by damaging radiation. But things likely were different in the ancient past.

Billions of years ago, the Red Planet was apparently much warmer and wetter, harboring vast lakes and flowing rivers on its surface. Curiosity's investigations at Gale, which measures about 96 miles (154 km) across, may shed yet more light on Mars' potentially habitable past, researchers said.

Curiosity will poke its way around the mountain's slopes, prospecting not for signs of life but for carbon-based molecules, which are the building blocks of life as we know it.

NASA's Mars Reconnaissance Orbiter spacecraft has found signatures of clays and sulfates— both of which form in the presence of liquid water — on the mountain's lower slopes. So Curiosity should get to check out areas that may once have been conducive to the existence of Earth-like life.

"All the types of aqueous minerals we've detected on Mars to date can be found in this one location," Golombek said.

Unparalleled look at another world

Curiosity is capable of traveling up to 492 feet (150 meters) per day. But it likely won't be covering that much ground on a daily basis, researchers said.

"It could take several months to a year to reach the foot of the mountain, depending on how often the rover stops along the way," Golombek said. "There will be plenty to examine before getting to the central mound."

Curiosity boasts a suite of sophisticated instruments, making it the most advanced robot ever sent to the surface of another world, researchers said. So it will likely make a host of new and intriguing science finds.

But Curiosity's mission will also yield other benefits. Its high-resolution camera will capture photos and movies as the rover cruises around Gale and its mountain, allowing Earthlings to see the Red Planet as never before.

"As Curiosity climbs toward higher layers, you'll see spectacular valleys and canyons like those in the U.S. desert Southwest," Golombek said. "The walls on either side of the rover will rise over 100 feet. The sights alone will be worth the trip."