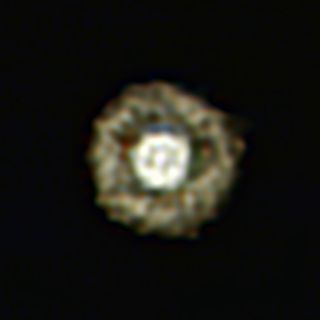 This picture of the nebula around a rare yellow hypergiant star called IRAS 17163-3907 is the best ever taken of a star in this class and shows for the first time a huge dusty double shell surrounding the central hypergiant. The star and its shells resemble an egg white around a yolky centre, leading astronomers to nickname the object the Fried Egg Nebula. The image was released Sept. 28, 2011.
(Image: © ESO/E. Lagadec)

First came the "Running Chicken" nebula, and now comes a cosmic "Fried Egg." A European telescope has captured the best image yet of one of the rarest classes of stars in our universe, and astronomers playfully point out that the cosmic scene resembles an egg white around a yolky center.

The European Southern Observatory's Very Large Telescope, at the Paranal Observatory in Chile, spotted the monster star, which is called a yellow hypergiant. The star is located about 13,000 light-years away from Earth, but is the closest yellow hypergiant found to date.

The new image, which ESO scientists dubbed the "Fried Egg Nebula" shows the central hypergiant star, officially known as IRAS 17163-3907, surrounded by a huge dusty double shell, making up the egg yolk and white. [See the photo and video of the "Fried Egg" nebula]

The massive star is so large it has a width that is about 1,000 times larger than our sun. In fact, if the Fried Egg nebula were placed at the center of our solar system, the Earth would be positioned deep within the star itself. The orbit of the planet Jupiter would be just above the star's surface.

But that's not all. The much larger neighboring nebula would engulf all the planets, dwarf planets, and even some comets that orbit way out beyond the orbit of Neptune. [Top 10 Star Mysteries]

The new observations from the Very Large Telescope show that the Fried Egg nebula also shines approximately 500,000 times brighter than the sun.

"This object was known to glow brightly in the infrared but, surprisingly, nobody had identified it as a yellow hypergiant before," Eric Lagadec, of the European Southern Observatory, said in a statement. Lagadec led the team that produced the new images.

The new observations of IRAS 17163-3907 were made using the Very Large Telescope's VISIR infrared camera. The image's release comes a week after ESO officials unveiled a photo of the so-called "Running Chicken" nebula, which got its nickname from the birdlike shape that some people detect in its brightest region. [Gallery: Strange Nebula Shapes, What Do You See?]

The images are the first of the Fried Egg nebula to clearly show the material around it and reveal two nearly perfectly spherical shells.

Yellow hypergiants are stars in an extremely active phase of their evolution. These rare stars experience a series of dynamic and explosive events that cause the star to eject four times the mass of the sun in only a few hundred years.

The spewed material from these explosions, which consists of dust and gas, make up the extensive double shell around the nebula.

The extreme activity of yellow hypergiants shows that the star will likely die an explosive death, potentially as one of the next supernova explosions to occur in our galaxy. Supernovas blast much-needed chemicals into the surrounding interstellar environment, and the resulting shock waves often spur the creation of newborn stars.