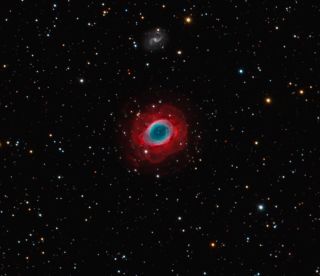 The Ring Nebula in Lyra lies 2.300 light years from Earth. It is estimated to have been expanding for about 1600 years.
(Image: © Bob and Janice Fera )

The famous Ring nebula is among the most photographed planetary nebulas in the night sky. Also known as Messier 57, M57 or NGC 6720, this popular nebula is about one light-year across and 2,000 light-years away in the northern constellation Lyra  approximately midway between the stars Beta and Gamma Lyrae.

The Ring nebula's appearance is thought to be due to perspective, with our view from Earth looking straight into what is actually a barrel-shaped cloud of gas and dust. [Gallery: Strange Nebula Shapes, What Do You See?]

The Ring nebula shines at about a magnitude +8.8 on the reverse scale used by astronomers to measure the brightness of objects in space.

On that scale, the lower an object's magnitude number, the brighter it appears in the sky. Objects with negative magnitude numbers are extremely bright. The limit of the unaided human eye for seeing objects in space is about a magnitude +6.

So the Ring nebula's magnitude +8.8 places it beyond the range of human eyesight, but makes it a stunning target to observe with even small telescopes.