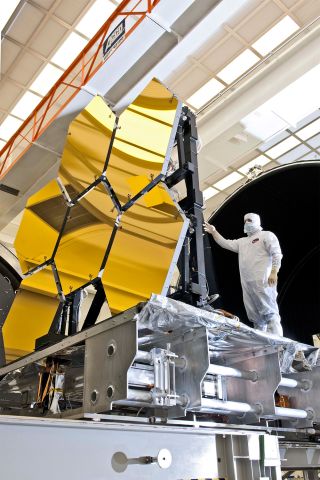 NASA's next huge space telescope passed a major mirror milestone this week on its path to become the world's most powerful space observatory when it launches in 2018.

Engineers completed coating 21 mirrors that will make up NASA's flagship James Webb Space Telescope with the thin — but vital — layer of gold that will reflect the faint infrared light collected by the observatory from the most distant reaches of the universe.

"It represents not just the coating event but the completion of a huge engineering project," John Mather, the telescope's senior project scientist, told SPACE.com. "The mirrors are spectacularly new technology."

Each of the 21 hexagonal mirror segments is almost the height of a person (4.9-feet, or 1.5 meters tall) and is made of beryllium, a material chosen for its light weight, stiffness and ability to withstand huge changes in temperature without warping.

Eighteen of the segments will be combined into one giant 21.3-foot (6.5-meter) tall primary mirror. The remaining three mirrors will be used elsewhere in the telescope, NASA officials said. [Photos: Building the James Webb Space Telescope]

In June 2010, engineers began the process of coating each mirror with about 0.12 ounces of gold, applied in layers only 120 nanometers thick — about a millionth of an inch, or 200 times thinner than a human hair.

"We faced many technical challenges on the Webb mirror coating program," Ian Stevenson, director of coating at Quantum Coating, Inc., the subcontractor responsible for the mirror coating process, said in a statement. "One of the most daunting was that all flight hardware runs had to be executed without a single failure."

To coat the mirrors, gold was heated to more than 2,500 degrees Fahrenheit (1,371 degrees Celsius), at which point it melted from solid to liquid. Then, engineers allowed it to evaporate onto the beryllium panels to build up the smooth, microscopically thin layer of coating. [Video: Coating the James Webb Space Telescope]

Completing this process is a triumph for the beleaguered Webb telescope project, which has been delayed repeatedly and seen its costs rise significantly. The observatory, a joint venture of NASA, the European Space Agency and the Canadian Space Agency, is named after former NASA administrator James Webb, who ushered the agency through most of the Apollo era.

The cost for the telescope is now estimated at $8.7 billion. Because of the project's budget overruns and delays, a House Appropriations Committee spending bill in July proposed to cancel the mission. A Senate subcommittee measure approved Sept. 14, however, would provide enough money to continue the project.