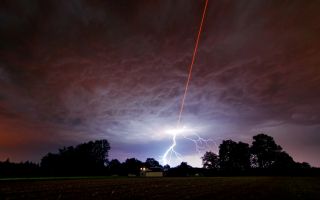 On Thursday 18 August, the sky above the Allgäu Public Observatory in southwestern Bavaria was an example of two very different phenomena: one an example of advanced technology, and the other of nature’s dramatic power.
(Image: © ESO/M. Kornmesser)

The new laser guide star unit of the Allgäu Public Observatory in southwestern Bavaria, Germany, tests a powerful laser beam on August 18, 2011, while lightning also flashes in the background in this amazing space wallpaper.