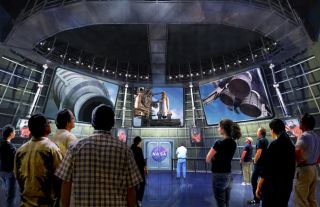 In less than a week thousands of visitors are expected to converge upon NASA's Kennedy Space Center in Florida to watch seven people launch on-board the Space Shuttle.

If plans go ahead as they were released on Wednesday, the company that contracts to run the sprawling visitor complex will soon give those thousands--if not millions more--an opportunity to experience a shuttle launch for themselves.

The new Shuttle Launch Experience is just one part of a 10-year, $160 million "thematic development" plan for the Kennedy Space Center Visitor Complex, announced July 6 by Delaware North Companies Parks & Resorts. Other projects will provide the public a chance to visit the space station, tour the universe with NASA's robotic probes and immerse themselves in the Vision for Space Exploration.

"Kennedy Space Center Visitor Complex will be the best place in the world to see, feel and understand space," said Daniel LeBlanc, Delaware North's Chief Operating Officer of the complex. "The final outcome of the 10-year Thematic Development Plan will be the ability to tell the NASA story better than ever before."

The 44,000 square foot Shuttle Launch Experience will be the most technologically advanced exhibit created at the Kennedy Space Center Visitor Complex (KSCVC) when it opens in early 2007.

A team composed of astronauts--including former Space Shuttle Commander Rick Searfoss--NASA experts and attraction designers conceived the $60 million simulator, which is being financed through admission, food and retail revenue. No taxpayer dollars are used in the operation or development of the Visitor Complex.

"The Shuttle Launch Experience will leave a lasting impression on any person who craves the adventure of real space flight," said LeBlanc in a press statement.

The visitors' journey will begin as they enter along a gantry-styled walkway into a building inspired by shuttle processing facilities located around the space center. Astronaut testimonials will play, describing their most exhilarating and thrilling moments, culminating in the sensation of launch. "Just don't get too comfortable and be ready for anything," says Searfoss.

As visitors proceed forward, they will next encounter a combination of projection and plasma screens that move up and down via robotic arms. Sound and lighting effects, including floor "rumblers" and fog will be used to recreate the moments before a launch.

Images of the shuttle on the launch pad, close-ups of the main engines igniting and the view back down to Earth during ascent will provide a step-by-step launch sequence for the soon-to-be "first time astronauts."

A countdown clock, started at T-minus three months, will fast forward through the shuttle's preparations for a flight. Visitors will then be ready to experience their own launch from inside the shuttle.

A ride with a "kicker"

Visitors will enter a "crew module" installed in the payload bay of the Space Shuttle and strap-in for launch.

The module is in fact a custom-designed motion platform, created by NASA, Delaware North and its consultants, that will feature an unprecedented range of motion and precisely programmed maneuvers. Other effects are to include multiple video screens to show different views of the mission, advanced audio effects, and special effects seats - with rumblers and a "kicker" that can give riders a jolt at just the right mission-induced moments.

The result, claims Delaware North, will be an authentic, high fidelity launch simulation that comes closer than any attraction has before to re-creating the shuttle ascent.

The countdown starts: "Ten, nine, eight, seven... go for engine start." Vibrations and a loud roar jolt the cabin as guests feel the main engines firing up. "We have main engine start, two, one..." The "kicker" shakes the cabin as the twin Solid Rocket Boosters ignite. The cabin leans backward as vibration generators engage, causing "crew members" to sink into their seats.

"We have booster ignition and liftoff!" Occupants will shake and rattle as the shuttle "lifts off" and clears the launch pad. The sensations of launch continue as they experience Max Q--the zone where enormous forces squeeze the shuttle--Solid Rocket Booster separation, main engine cut-off and the External Tank separation.

As the orbiter enters simulated space, the cargo bay doors above open to reveal a breathtaking view of the Earth. Seen in all its beauty and fragility, visitors "begin to understand why looking back at our home planet from space is one of the most profound experiences in any astronaut's life."

The newly flown "astronauts" will then make their way back into the real world. A spiral ramp guides them on a symbolic journey from the edge of space back down to life on Earth. A fiber optic star field covers the walls and ceiling, immersing visitors in the cosmos. In the center below the ramp is a large, projected image of our home planet, as it appears to astronauts orbiting in space.

Along their way are shuttle mission plaques--one for each of the more than 100 missions that have launched from Kennedy Space Center.

The Shuttle Launch Experience is the anchor for the eight exhibits planned for addition over the next decade.

NASA's Interplanetary Exploration 4D Exhibit will show guests what it's like to travel along with the agency's unmanned exploration probes, through "fly-bys" and landings on other planets, moons, and asteroids. Real NASA imagery will bring the surfaces of other planets to 3D life. Guests will be more than just watching though; they will feel the intense heat of the sun, and the cold sprinkles of ice from comet trails, creating the feeling of traveling through the solar system.

Another exhibit that will put guests in Earth orbit is Visit to International Space Station. A pre-show queue will tour the history of space stations, including models, hardware and other artifacts from early missions. Guests will then see a large format 3D movie showcasing the International Space Station, filmed by astronauts from space. Exiting the film, they will visit simulated station components with interactive kiosks to view photos from the outpost.

Origins: A Journey to the Birth of the Universe will launch a new generation of planetariums and serve as a tribute to NASA's great telescopes. Cutting-edge multimedia and simulation, in-theater effects and images from the Hubble Space Telescope, Chandra and the still-to-be-launched James B. Webb Telescope will provide views of universe.

Conceived as a mini-science museum within the KSC complex, Exploration of Our Home Planet will provide dozens of interactive exhibits allowing guests to explore earth and see how the forces of nature shape the planet.

To bring the new NASA Vision for Space Exploration down to Earth for visitors, the Moon, Mars and Beyond exhibit will feature up-to-date information on missions that are underway returning humans to the Moon, and to land humans on Mars. Guests will receive updates on robotic missions, the shuttle replacing Crew Exploration Vehicle and the latest developments from NASA facilities around the world and at various locations in space.

When the Space Shuttle program concludes, the visitor complex has envisioned a home for one of the orbiters. Visitors will be able to interact with the real vehicle and browse artifacts. Placed in the context of a processing facility environment, the Space Shuttle Orbiter Exhibit will be designed to capture the imagination of the public in much the same way as the Saturn V rocket does today at the Apollo/Saturn V Center.

The Merritt Island National Wildlife Refuge Interpretive Facility will combine exhibits with live interpretation to introduce the visitor to the diversity of plants and animals that live and thrive in the areas that surround Kennedy Space Center. A boardwalk will be peppered with graphics describing the Refuge's various ecosystems, flora and fauna. A pond will be planted with species representative of the Refuge and designed to attract wildlife.

In addition to the new exhibits, upgrades to the Visitor Complex experience will begin the moment guests enter the property, including new way-finding signage, a new entrance icon and parking lot enhancements. The KSC Experience, a new bus tour pre-show, will use exhibits to introduce the scope and scale of the center's property, overview the operations and preview what visitors will see along the NASA tour.