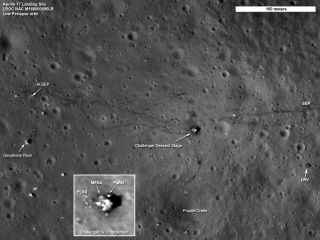 The twists and turns of the last tracks left by humans on the moon crisscross the surface in this LRO image of the Apollo 17 site. In the thin lunar soil, the trails made by astronauts on foot can be easily distinguished from the dual tracks left by the lunar roving vehicle, or LRV. Also seen in this image are the descent stage of the Challenger lunar module and the LRV, parked to the east.
(Image: © NASA/Goddard/ASU)

New photos of several Apollo moon landing sites were released today (Sept. 6), showing extraordinary new details about three areas on the lunar surface that were visited by humans. The images include the sharpest views yet of tracks left by the astronauts and their lunar rovers.

"The images look very spectacular, as you can see for yourself," Mark Robinson, an Arizona State University, Tempe scientist, who is the principal investigator of LRO's camera, said in a news briefing today.

The pictures were taken by NASA's Lunar Reconnaissance Orbiter (LRO), a robotic probe in orbit around the moon. The new views from the spacecraft's narrow angle camera are only the third time that close-up pictures of the landing sites have been snapped and resolved by the unmanned spacecraft around the moon. [See the new Apollo moon landing site photos]

In one image of the Apollo 17 landing site, the last tracks left by astronauts Eugene Cernan and Harrison Schmitt on the moon are visible. The crisscrossing footprints can be easily distinguished from the tracks left by the astronauts' lunar rover.

And, since Robinson is well aware of what the lunar rovers look like, he said he "can actually see, if you squint really hard – can begin to resolve the seats and the left wheels that are slightly turned to the left."

In particular, being able to clearly see tracks and equipment on the moon – and their relative brightness or darkness on the moon's surface – can reveal important clues about the lunar environment.

"From a science standpoint, [the images] are important for two reasons," Robinson said. "They tell us something about the photometric properties of the moon – why are they darker? Scientists are working to investigate that question. In a more practical sense, it allows us to find the exact spot where samples were collected."

The sharper views also allow scientists to more accurately identify objects and pieces of hardware that were left on the moon. Robinson himself compared the new pictures with images taken from the missions to help pinpoint some of the bright objects on the surface, such as experiments, thermal blankets, and life support backpacks used on moonwalks that were discarded by astronauts before they blasted off from the moon.

And for those interested in whether the planted American flags from the Apollo missions are still standing, Robinson said it's difficult to know for sure. [Top 10 Apollo Hoax Theories]

"I've looked around, and all I really see are the spots where the flag was planted," Robinson said.

With the moon's extreme hot and cold temperatures and ultraviolet environment, Robinson said it's highly unlikely that anything is left of the nylon flags after so many decades.

"If the flags are still there, they're probably in pretty rough shape," he said.

The new images were taken over the course of a month-long period when the LRO spacecraft entered into a low altitude orbit that dipped to within 14 miles (22 kilometers) of the moon's surface at times. LRO normally circles the moon at an altitude of about 31 miles (50 km) above the lunar surface.

As the spacecraft zeroed in on the three Apollo landing sites, the probe was also able to collect valuable observations using its other instruments.

Today, the probe returns to a more circular orbit, Vondrak said. In mid-December, LRO will shift into an elliptical orbit with its lowest altitude at 19 miles (30 km) over the south pole, and its highest point at 124 miles (200 km) over the north pole.

The Lunar Reconnaissance Orbiter has been in orbit around the moon since June 2009. The $504 million car-sized spacecraft first captured close-up images of the Apollo landing sites in July 2009, which revealed new details about the sites and even spotted hardware that was left behind on the lunar surface.

The LRO probe is currently on an extended mission through at least September 2012.

On Thursday (Sept. 8), NASA will launch a new mission to measure the moon's gravity field in unprecedented detail. The Gravity Recovery and Interior Laboratory (GRAIL) mission is made up of twin spacecraft that will orbit the moon in tandem.

This story was updated to correctly reflect the statements made by scientist Mark Robinson referring to the U.S. flags on the moon.