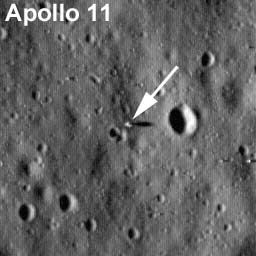 In this image, the Apollo 11 lunar lander and it shadow can be seen in a view from NASA's new Lunar Reconnaissance Orbiter, which is scouting the moon for new landing sites for future astronauts.
(Image: © NASA/GSFC/ASU)

For stubborn folks who still believe the Apollo astronauts never landed on the moon, NASA has new images - definitive proof - that clearly show the Apollo 11 lander that carried the first astronauts to the lunar surface 40 years ago.

The images, taken by NASA's first lunar scout in more than a decade, the Lunar Reconnaissance Orbiter (LRO), show the Eagle lunar lander at Tranquility Base, where Apollo 11 astronauts Neil Armstrong and Buzz Aldrin landed on July 20, 1969. They were snapped between July 11 and 15 of this month and released by NASA today.

"The LROC team anxiously awaited each image," said LROC principal investigator Mark Robinson of Arizona State University. "We were very interested in getting our first peek at the lunar module descent stages just for the thrill -- and to see how well the cameras had come into focus. Indeed, the images are fantastic and so is the focus."

The image does not reveal whether the U.S. flag planted there is still standing or not. Whether or not the flag will be visible in later images isn't uncertain, Robinson said, adding that he thinks the Apollo 11 flag was knocked over by the thrusters when the astronauts left the moon's surface.

The Indian and Japanese missions have also snapped images of the Apollo 11 site, but they don't have the high resolution of LRO's images, Robinson said.

The Apollo 11 landing site wasn't the only one that the LRO camera (dubbed LROC) photographed: It also snapped pictures of the landing sites of the other five Apollo landings. (The remaining site, for Apollo 12, is expected to be photographed in the coming weeks.) The lunar modules for all of these sites imaged are visible as small dots; their shadows can also be seen. A few more details can be seen in the image of the Apollo 14 landing site, taken only two days ago, including scientific instruments and astronaut footprints.

As LRO gradually descends to a lower orbit, the images will improve and provide closer looks at the lunar landing sites.

"This is only a first glimpse," said Michael Wargo, chief lunar scientist at NASA Headquarters in Washington, D.C., "From now on, they're only going to get better."

The images of these sites are expected to show scientists how the sites have changed since the astronauts trod across them, whether there are any new craters and how the leftover human artifacts have fared in the lunar environment. And the pictures won't just serve as a record of our past presence on the moon, as scientists will be able to use the information in them to make topographic maps of the lunar surface at those sites.

About the size of a Mini Cooper car, the $504 million LRO probe, an orbiting satellite, launched toward the moon on June 18. The probe is expected to spend at least one year mapping the moon for future manned missions, as well as several more years conducting science surveys.

Some people have questioned whether NASA really went to the moon or if the whole thing was faked. No serious and level-headed historian, researcher or space industry analyst doubts the moon landings, however.