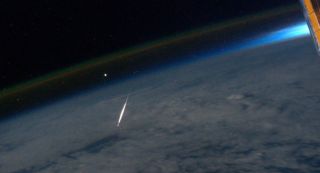 A space radar picked up the sounds of a meteor shower as it delighted skywatchers over the weekend.

The U.S. Air Force Space Surveillance Radar in Texas recorded echoes of the Perseid meteor shower on Friday (Aug. 12) as it passed over the monitoring facility. The Perseids are often the most dazzling meteor shower of the year, but a fluke of timing put the peak of this year's space rock light show in competition with the August full moon.

The 2011 Perseids did not disappoint, though, despite the moon's interference. Astronaut Ron Garan took pictures of the meteors from aboard the International Space Station, which are seen in the video.

The Perseid meteor shower has been observed by skywatchers for at least 2,000 years, according to NASA. The meteors are actually pieces of the comet Swift-Tuttle, which orbits the sun once every 133 years. The meteor shower gets its name Perseid from its origin point in the night sky: the constellation Perseus.

Every August, Earth flies through the comet's cloud of debris and the tiny bits of Swift-Tuttle (most of them more than 1,000 years old) burn up in the atmosphere as they streak at nearly 133,200 mph (214,400 kph). According to the website Spaceweather.com, international observers reported up to 20 meteors per hour during the Perseids' peak.