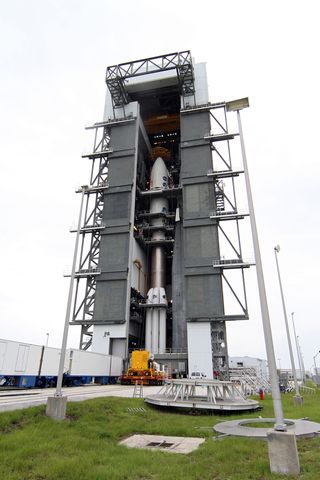 Inside the Vertical Integration Facility at Space Launch Complex 41, the Juno spacecraft, enclosed in an Atlas payload fairing, is in position on top of its Atlas launch vehicle. The spacecraft was prepared for launch in the Astrotech Space Operations' payload processing facility in Titusville, Fla. The fairing will protect the spacecraft from the impact of aerodynamic pressure and heating during ascent and will be jettisoned once the spacecraft is outside the Earth's atmosphere. Juno is scheduled to launch Aug. 5 aboard a United Launch Alliance Atlas V rocket from Cape Canaveral Air Force Station in Florida.
(Image: © NASA/Cory Huston)

A NASA spacecraft is just days away from blasting off on a 400-million-mile trip to Jupiter on a mission to find out what makes the largest planet in our solar system tick.

The Juno probe is poised to launch Friday (Aug. 5) atop an unmanned Atlas 5 rocket which is set for an 11:34 a.m. EDT (1534 GMT) liftoff from the Cape Canaveral Air Force Station in Florida. Weather forecasts predict a 70 percent chance of good weather for the planned launch, NASA officials said.

The NASA team in charge of the mission performed a dress rehearsal Monday (Aug. 1) for the upcoming launch. [Photos: NASA's Juno Mission to Jupiter]

"Everything went smoothly during the exercise and the spacecraft and its booster are in good shape," NASA officials wrote in an update.

NASA's $1.1 billion Juno mission is expected to take five years to reach Jupiter, if all goes well. It will be the first solar-powered spacecraft ever bound for Jupiter and is the first probe to visit the gas giant planet since 2007, when NASA's New Horizons spacecraft zipped by on its way to the dwarf planet Pluto.

The Juno mission has been eight years in the making. Astronomers hope the spacecraft's eight instruments will help them understand how the gas giant planet, which contains twice as much mass as the rest of the planets in the solar system combined, formed from the dust and gas left over by the sun.

"We're about to start our journey to Jupiter to unlock the secrets of the early solar system," said Scott Bolton, the mission's principal investigator from the Southwest Research Institute in San Antonio, Tex.

NASA has invited 150 of its Twitter followers to attend Juno's launch in Florida. The two-day gathering, called a Tweetup, begins Thursday, Aug. 4.  The invitees were selected from more than 1,200 online applications and represent 28 states, the District of Columbia and the countries of Canada, Finland, Norway, Spain and the United Kingdom.

The Juno spacecraft carries eight instruments to study Jupiter in unprecedented detail. One instrument, a color camera, is expected to snap spectacular color-images of Jupiter since Juno will be flying closer to the planet than any other spacecraft. [Video: Key to Solar System's Origins Locked Inside Jupiter]

At its closest point, Juno will sail just 3,100 miles (5,000 kilometers) over Jupiter's cloud tops. The spacecraft will fly in a polar orbit around Jupiter, which should allow it to completely map the planet during the 33 orbits of Juno's primary one-year science mission.

"The Juno spacecraft will pass repeatedly just above Jupiter's surface, so we will get closer to the dynamo there than we could on any other planet in the solar system," explained Jack Connerney, Juno's deputy principal investigator and head of the magnetometer team at NASA's Goddard Space Flight Center in Greenbelt, Md. "That's a very exciting prospect because it will really enhance our ability to determine what's going on."

NASA is keeping a close eye on the weather for Juno's upcoming launch. Currently, forecasts are promising, with the chance of heavy clouds posing the only concern.

"Meteorologists are monitoring Tropical Storm Emily this week, too, but the storm is not expected to reach the Central Florida region, where Cape Canaveral Air Force Station is located, until at least Friday night," NASA officials wrote in a mission update today (Aug. 2). "However, the official forecast notes that storm tracks and intensity predictions can shift dramatically over time.

NASA has a 22-day window to launch the Juno probe toward Jupiter.