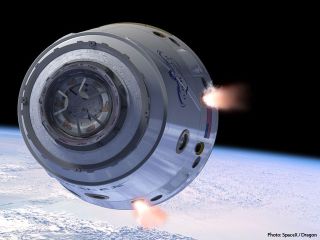 MOFFETT FIELD, Calif. — Despite the grounding of NASA's storied space shuttle fleet, American spaceships are expected to make three trips to the International Space Station in the coming months.

All of these visits, however, will be by private vehicles. The California-based company SpaceX is set to launch its Dragon capsule toward the station on Nov. 30 on its second and final orbital test flight, NASA officials announced last week. And if all goes well, the firm could launch another Dragon capsule on its first operational cargo-carrying mission three or four months later.

The Virginia-based company Orbital Sciences, for its part, is planning to send its Cygnus capsule racing toward the station in February 2012.

So, even though the shuttle program has been retired, the future may not be so bleak for American spaceflight, many in the private sector stress.

"I believe we're on the cusp of a golden age of industry-led innovation," Garrett Reisman, head of SpaceX's commercial crew development program, said today (July 28) at the New Space 2011 conference, which is being held here at NASA's Ames Research Center. [NASA's Space Shuttle Program In Pictures: A Tribute]

Not carrying astronauts yet

The three upcoming flights to the space station won't be carrying any astronauts. They're being made under NASA's Commercial Orbital Transportation Services (COTS) program, which aims to encourage the development of private cargo-carrying craft to fill the gap left by the retirement of the shuttle fleet.

SpaceX holds a $1.6 billion NASA contract to make 12 supply flights to the orbiting lab. Last December, the company made its first orbital test flight with its Dragon capsule, which launched atop SpaceX's Falcon 9 rocket.

The Nov. 30 mission will be the Dragon/Falcon system's second demonstration flight under the COTS program. While the first Dragon test flight orbited Earth twice and then splashed down in the Pacific Ocean, SpaceX wants this second one to dock with the space station.

And, the capsule will carry cargo on both legs of the journey, SpaceX officials said.

"If we're up there, we might as well take some stuff up and bring some stuff back down," Reisman told SPACE.com.

If all goes well with that flight, Reisman added, the next Dragon mission would likely not be a demo — it would be a fully operational re-supply mission, the first of the 12 under SpaceX's contract. And it could happen as soon as March 2012.

Orbital Sciences also has a cargo re-supply contract. NASA is paying Orbital $1.9 billion to make eight flights using the company's Cygnus capsule and Taurus 2 rocket, both of which are under development.

The firm hopes to send the Taurus 2 on its first test flight this December, SpaceNews reported recently. A full demo run, during which Cygnus docks with the space station, is planned for two months later.

Both SpaceX and Orbital Sciences are interested in carrying more than just cargo to the orbiting lab. The companies are developing craft in hopes of one day transporting NASA astronauts to the outpost. For now, NASA spaceflyers will be hitching rides on Russian-built Soyuz vehicles.

SpaceX plans to upgrade the Dragon by installing seats and a launch-abort system. Orbital is developing an entirely different vehicle, a space plane called Prometheus.

But they're not the only ones. A private orbital space race is taking shape, as a handful of other firms —including Sierra Nevada Corp., Blue Origin, Excalibur Almaz and Boeing — are working on their own crew-carrying vehicles. [Vote Now! The Best Spaceships of All Time]

Both Boeing and Sierra Nevada have said they plan to be making manned flights by 2015. Sierra Nevada, in fact, hopes to be fully operational by then.