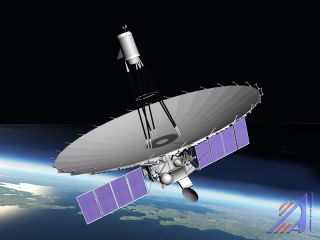 There was no immediate word on the operational status of the new radio observatory beyond the fact that it was placed into the planned elliptical orbit that peaks nearly 207,000 miles (330,000 kilometers) above the Earth, and reaches a low of about 621 miles (1,000 km).

"The aim of the mission is to use the space telescope to conduct interferometer observations in conjunction with the global ground radio telescope network in order to obtain images, coordinates, motions and evolution of angular structure of different radio emitting objects in the universe," Federal Space Agency officials said in a statement. "Scientists also expect to obtain more information about pulsars and interstellar plasma, black holes and neutron stars in the Milky Way." [Strangest Things in Space]

Scientists from more than 20 nations, including the United States, are participating in the project, either through contributions of on-board hardware or access to the terrestrial antennas that, working with Spektr-R, will permit interferometry measurements during the observatory's planned five years of operations.

Spektr-R was originally scheduled for launch in 2004 or 2005 before encountering multiple delays in its construction. It has been in development for more than a decade.

Most recently, the launch date was put into question following a dispute between commercial and Russian government satellite missions, notably Spektr-R, on which Zenit customer would receive the limited supply of Zenit rocket parts.

Spektr-R was launched aboard a Russian-Ukrainian Zenit-3M rocket equipped with a Fregat-SG upper stage. It was built by Lavochkin Association of Moscow.

The Radioastron mission is being coordinated by the Astro Space Center of Moscow, which is part of the Lebedev Physical Institute of the Russian Academy of Sciences.

This article was provided by Space News, dedicated to covering all aspects of the space industry. SPACE.com staff contributed to this report from New York City.