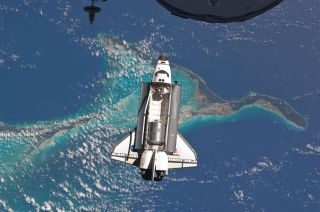 Mission managers opted to add a bonus day to the last flight of shuttle Atlantis to give its four astronauts more time to unpack the enormous amount of cargo they are delivering to the International Space Station.

"There's a lot of good work that we can help the space station program with – if we had more time to give them, we probably would do that as well," LeRoy Cain, chair of Atlantis' mission management team, told reporters in a news briefing today. Atlantis can stay in space an extra day because its power system has about a bonus day's worth of supplies, officials said.

Atlantis hauled 9,500 pounds (4,318 kilograms) of cargo into orbit, including supplies, spare parts and a year's worth of food, when it launched from Florida on Friday (July 8). These resources will help the station continue to operate through 2012, when NASA will no longer be able to rely on the space shuttles to carry hardware and supplies to the massive complex. [9 Weird Things That Flew On NASA's Shuttles]

NASA is retiring its shuttle fleet after 30 years to make way for a new program aimed at deep space exploration, including crewed expeditions to an asteroid and Mars.

With the addition of a day, Atlantis' is now flying 13-day mission to the International Space Station and will aim to return to Earth and land at NASA's Kennedy Space Center in Cape Canaveral Fla. at 5:56 a.m. EDT (0956 GMT) on July 21.

Mission managers also reviewed a bulk of the data from two separate inspections of Atlantis' heat shield and concluded that the astronauts will not need to perform what is known as a focused inspection of any troubling areas.

The mission management team has not officially cleared the orbiter for re-entry into Earth's atmosphere, but Cain expects that the ground teams will be able to reach a decision tomorrow (July 12) once the remainder of the heat shield images are analyzed.

While mission managers discussed the extension day for shuttle Atlantis, astronauts on the International Space Station prepared for a busy Tuesday in orbit.

Tomorrow, two station astronauts will venture outside the orbiting lab on a spacewalk — the last excursion ever to occur while a visiting NASA shuttle is parked at the space station.

During the spacewalk, NASA astronauts Mike Fossum and Ron Garan will move a broken ammonia coolant pump into Atlantis' cargo bay so it can be returned to Earth. They will also retrieve a robotic satellite refueling experiment and install it on the space station.

The entire spacewalk will last about six hours, NASA officials have said.