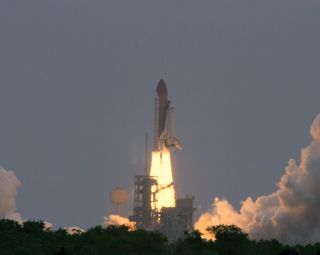 Atlantis just clears the tower in this closer view of the launch on July 8, 2011.
(Image: © Roger Guillemette for SPACE.com)

"To me, it looked like it was lifting off in slow motion," Moses said, tearing up at the thought. "It was very moving. It was very beautiful." [Photos of NASA's Last Space Shuttle Launch]

The strong emotions on display today were far from surprising.

Atlantis' launch was the last one ever for NASA's shuttle program after 30 years of operation. In the past three decades, the shuttle has become an American icon, a symbol of the nation's pride, technological know-how and leadership in space.

And some drama on launch day only intensified the strong emotions.

It appeared for most of the morning that Atlantis' launch try would be scrubbed due to bad weather. NASA pegged the chances of it blasting off today at just 30 percent. [Shuttle Launch Countdown: T-9 Minutes to Blastoff]

Despite the odds, the mission team decided to fuel up the shuttle's massive external tank early this morning. It turned out to be a good move; the predicted showers and thunderstorms never materialized, and Atlantis was cleared to launch on its 12-day mission to the International Space Station.

But then, just 31 seconds before the shuttle was to take to the skies, the countdown clock stopped. As Atlantis' 10-minute launch window seemed to melt away, the mission team investigated the cause of the hold. Ground crews quickly verified that a vent arm at the top of the shuttle was fully retracted, and that it thus posed no danger to the vehicle.

Atlantis was cleared for launch once again, and the shuttle's main engines roared to life — with 58 seconds left in today's window.

The mission, called STS-135, is the 33rd flight of Atlantis and the 135th in the history of NASA's shuttle program. NASA estimated that between 750,000 and 1 million people came to see Atlantis off.

Leinbach said he got choked up during the launch, as did Moses. And the mission team lingered for a while in the control room, not wanting to say goodbye to each other or to their work getting shuttles off the planet.

"It seemed like we didn't want to leave," Leinbach said. "You just want to hang around a little bit longer and relish our friends and what we've accomplished."

The end of an era?

NASA will never launch another shuttle to the space station, or to anywhere at all. But this development shouldn't be seen as the end of an era, officials said. Rather, it's a transition to something new and exciting, they added.

NASA will rely on Russian Soyuz spacecraft to transport astronauts to low-Earth orbit for the next few years. But over the long haul, the agency is counting on American private spaceflight firms to take over this taxi service. To this end, NASA is encouraging these companies to develop their own crewed spaceships.

NASA, for its part, is casting its gaze farther afield. President Obama has charged the agency with sending astronauts to an asteroid by 2025, then on to Mars by the mid-2030s.

"Some say that this final shuttle mission will mark the end of America's 50 years of dominance in human spaceflight," NASA chief Charlie Bolden said in a video released soon after the launch. "I want to make clear that American leadership in space will continue for at least the next half-century, because we laid the foundation for success."