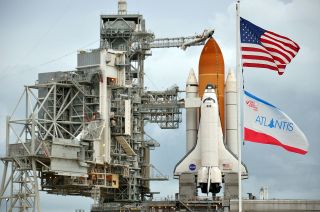 However, current forecasts show that bad weather could keep the shuttle from getting off the ground today. Showers, lightning and thunderstorms are predicted to be in the area around launch time, and NASA pegs the chance of a weather-related scrub at 70 percent.

If stormy weather scuttles today's attempt, NASA will have other opportunities to launch Atlantis tomorrow and Sunday, with the forecasts improving each successive day. The chance of bad weather is forecast to be 40 percent on Saturday and 50 percent on Sunday, according to NASA officials.

Yet, when Atlantis does blast off, it will be a historic moment — the last time a space shuttle, America's iconic space plane, streaks through the heavens. [Retro Space Pictures: Building Shuttle Atlantis]

"It's bittersweet, obviously. It's time for the shuttle to be retired," said Roger Launius, space history curator at the Smithsonian's National Air and Space Museum. "But the shuttle-hugger in me will be sad to see it go."

One last trip to the space station

Atlantis is embarking on a 12-day mission to the International Space Station, where it will drop off about 9,500 pounds (4,318 kilograms) of supplies and spare parts to the orbiting lab. The delivery is intended to keep the station well stocked and running for the years following the shuttle program's retirement.

Atlantis is also carrying an experiment designed to test technology that could refuel and potentially repair satellites in orbit.

The STS-135 mission carries a skeleton crew of just four astronauts, compared to the usual six or seven. The last four astronauts who will fly on a space shuttle are commander Chris Ferguson, pilot Doug Hurley and mission specialists Rex Walheim and Sandra Magnus.

Into the history books

The space shuttle program was born in 1972, when President Richard Nixon announced its existence to the nation. The orbiters started flying in 1981 and will have made a total of 135 flights when Atlantis' wheels finally roll to a stop later this month.

While the shuttle program perhaps failed to live up to the lofty expectations NASA laid out for it, the orbiter fleet did accomplish a lot, experts say. NASA's space shuttles deployed, fixed and upgraded the Hubble Space Telescope, for example, and helped assemble the massive space station. The shuttles also made access to space more routine than had previously been possible.

Over the course of its lifetime, the space shuttle became an American institution, a symbol of American technological know-how and the nation's penchant to dream big.

Even after their retirement, the shuttles will continue to be in the public eye; they'll take up residence at museums around the country. Atlantis is headed to the KSC Visitor Complex; its sister shuttles Endeavour and Discovery will go to the California Science Center in Los Angeles and the Smithsonian in Washington, D.C., respectively.