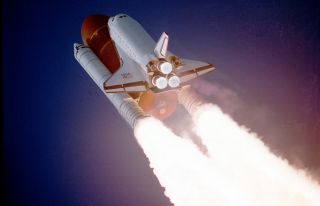 The last few minutes before a space shuttle roars into the sky are full of excitement and anticipation, as well as hard work to ensure that all the spacecraft's systems are working properly and are ready for liftoff.

The space shuttle Atlantis is currently positioned on Launch Pad 39A at NASA's Kennedy Space Center in Cape Canaveral, Fla., ready for its final mission, and the last ever flight of the agency's space shuttle program. Atlantis is slated to blast off on Friday (July 8) at 11:26 a.m. EDT (1526 GMT), if weather cooperates.

As the hours and minutes tick down to launch (as indicated by the "T-minus" mark), NASA's ground teams perform a battery of checks before giving the final "go." Here's a breakdown of some of the major milestones leading up to the big moment:

T-minus 9 minutes: At several predetermined points during the launch countdown, NASA will pause the clock as part of standard procedure to give the ground teams time to resolve any unexpected issues that may crop up. At the end of these "built-in holds," the countdown clock will resume unless NASA encounters any technical glitches. [How to Watch NASA's Final Space Shuttle Launch]

At the T-minus 9 minute mark, the clock will typically enter a 45-minute hold. Before this point, the NASA test director will perform a launch readiness poll of the shuttle launch team. Weather forecasts for the Cape Canaveral area will also be checked to verify that the conditions meet the agency's criteria for a safe launch.

During the hold, NASA officials on consoles will be polled for their "go/no go" decisions. These technicians closely monitor computer displays and gauges that show the performance of the shuttle's systems at the launch pad.

T-minus 7 minutes, 30 seconds: At this point, the command will be given to retract the orbiter access arm, which is the lowermost scaffolding arm located 147 feet (about 45 meters) above the surface of the launch pad. This structure allows people to enter the shuttle's crew compartment. The orbiter access arm remains in its extended position until seven minutes, 24 seconds before launch to serve as an emergency escape route for the flight crew. [NASA's Space Shuttle – From Top to Bottom]

The arm, which is 65 feet (20 m) long and five feet (1.5 m) wide, can be mechanically or manually repositioned in about 15 seconds if there is an emergency or contingency situation.

T-minus 5 minutes: Barring any technical or weather concerns, the commander of the shuttle will be given the "go" to start the orbiter's auxiliary power units (APU), which produce pressure for the shuttle's hydraulic system. There are three separate onboard APUs, and their fuel systems are located in the aft fuselage of the orbiter.

Once the APUs are powered up, ground teams will analyze the system, and if they detect any glitches, this could halt the countdown. At the T-minus 4 minute, 30 seconds mark, the Ground Launch Sequencer program will switch the main fuel valve heaters off. As the clock ticks down, the GLS will also perform checks of the fuel and space shuttle main engines.

T-minus 2 minutes: At this point, the shuttle's commander will advise his or her crewmates to close the visors of their launch and entry suits. In these final minutes leading up to launch, the Ground Launch Sequencer is still in automatic control of the countdown.

T-minus 31 seconds: At this moment in the countdown, if there are no technical issues, the "go" command will be given for "auto sequence start," which means that the Ground Launch Sequencer will hand off primary control of the countdown to the shuttle's onboard computers.

T-minus 16 seconds: Now, the sound suppression water system at the launch pad will be activated to protect the shuttle and its payloads from being damaged by the strong acoustical energy during liftoff.

Water is stored in massive tanks on the northeast side of the launch pad and is released just prior to the ignition of the shuttle's main engines. Nine seconds after liftoff, the water suppression system's peak flow rate is 900,000 gallons per minute.

T-minus 6 seconds: Just prior to this moment, if everything is functioning as it should, the command will be given to start the space shuttle's main engines. Beginning at the T-minus 6 second mark, each of the three main engines will be ignited and roar to life.

T-minus 0 seconds: The solid rocket boosters will be ignited, and the bolts that have secured the shuttle to the ground in the last six seconds of the countdown are explosively released, allowing the orbiter to rocket into the sky. Once this happens, we have liftoff!