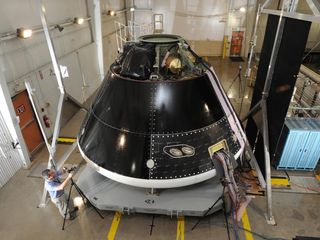 WASHINGTON — Lockheed Martin Space Systems plans to eliminate 1,200 jobs across the United States by the end of the year in order to "address affordability and improve its competitive posture," the company announced Tuesday (June 14).

The most significant work force reductions will occur at Lockheed Martin Space Systems' Denver headquarters as well as in Sunnyvale, Calif., and the Delaware Valley region of Pennsylvania, where the firm has several development programs that are now transitioning to production, the company said in a statement. Middle management ranks will be reduced by 25 percent, according to the statement.

"In today's economic environment, we have two choices: make painful decisions now or pay a greater price down the road," Lockheed Martin Space Systems Executive Vice President Joanne Maguire said in the statement. "This is a difficult but necessary action to improve efficiencies and make our business more competitive going forward. We will remain relentlessly focused on achieving operational excellence and mission success for our customers as we position to deliver more affordably in the future."