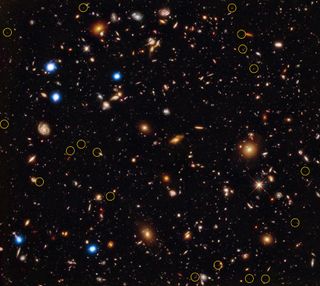 This image shows a close-up of the Chandra Deep Field South, as well an optical and infrared image from the Hubble Space Telescope of the same field. The views, and other Chandra X-ray Observatory observations, shows growing black holes have been detected in 30% to 100% of the distant galaxies, and that the black holes are heavily obscured by dust and gas.
(Image: © X-ray: NASA/CXC/U.Hawaii/E.Treister et al; Optical: NASA/STScI/S.Beckwith et al)

As if black holes weren't already difficult enough to spot with that whole "swallowing light" thing, the earliest ones seem to be hiding behind thick clouds of dust and gas, a new study finds.

Astronomers have searched for black holes at the center of some of the first known galaxies for years, with no results.

But the new study has not only pinpointed these ravenous objects, it has also determined that they are closely tied to the evolution of their parent galaxies, researchers said. [Photos: Black Holes of the Universe]

Searching for something that swallows light

Although scientists can't see a black hole itself, they can detect the material that's being sucked into the massive objects. As the particles speed up, they emit massive amounts of energy.

Galaxies that formed only a billion years or so after the Big Bang don't seem to have such energetic outbursts, leading scientists to conclude that the black holes inside them were smaller. The universe is estimated to be 13.7 billion years old. [Video: Black Holes: Warping Time and Space]

"It's actually natural to expect all of these (early) galaxies to have growing supermassive black holes," Ezequiel Treister, of the University of Hawaii, told SPACE.com. "And yet people hadn't found them before."

Treister and his team decided to search for the first black holes indirectly. After using the Hubble Space Telescope to identify likely candidates, they studied their X-ray emission of using Chandra X-Ray Observatory.

Because light takes time to travel, looking at a faraway object is the same as peering back into time.

It turned out that early black holes were challenging to locate because they were shrouded in the dense dust of their galaxies.

"Only very high energy X-rays could go through," said Treister.

Not only did the team find these early giants, they discovered that the first supermassive black holes were closely related to their parent galaxies.

Black holes and galaxies near the same age as the Milky Way have various connected properties. The mass of the black holes, for instance, correlates to the luminosity of the galaxy, and to the mass of the dark matter halo surrounding it.

But early black holes were not expected to have this same connection. Astronomers predicted that such a connection would develop over time, as the black hole and its parent galaxy gradually reached an equilibrium.

This is simply because of the vast difference in sizes.

"The black hole grows in the center," explained Treister. "But star formation is spread across the galaxy."

For the two to equalize so quickly is surprising.

"Why this connection happens and how it happens so quickly, we don't know," Treister said.