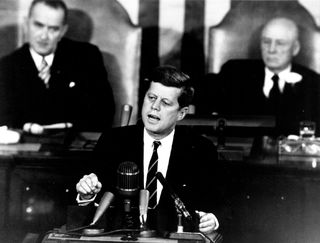 On May 25, 1961, President John F. Kennedy delivered one of the most memorable speeches of the 20th century. He challenged Congress and the American people to put a man on the moon, and return him safely to Earth, by the end of the decade.

The rest, of course, is history. NASA's Apollo program roared to life, and just eight years later Neil Armstrong's boot crunched down into the lunar dirt. [Photos: JFK and NASA]

Kennedy's announcement came close on the heels of two embarrassing American Cold War defeats. The Soviet Union had put the first human being, cosmonaut Yuri Gagarin, in space on April 12, 1961. Less than a week later came the Bay of Pigs fiasco, a failed CIA-backed attempt to overthrow Fidel Castro's communist government in Cuba.

As the 50th anniversary of Kennedy's momentous speech approaches, SPACE.com caught up with historian and space policy expert John Logsdon, author of "John F. Kennedy and the Race to the Moon" (Palgrave Macmillian, 2010). [50 Years of Presidential Visions for Spaceflight]

Logsdon chatted about what drove Kennedy to make the speech, and what it means today:

SPACE.com: What did Kennedy hope to achieve with this speech? Was he just interested in beating the Soviets, or did he also want to jump-start a space program that was still in its infancy?

John Logsdon: In the immediate aftermath of Gagarin, on April the 20th, he had asked his advisers to find him a "space program which promises dramatic results in which we could win." So that was the guidance he set out: something in space, dramatic, win.

There were no real alternatives, either in space or, as he told his science adviser, in any other area that would have the impact of a space achievement. The Soviet Union kind of had defined the playing field as space success, and Kennedy came to the conclusion that he had no choice but to accept that game rather than try to shift the stakes into something else. [Biggest Revelations of the Space Age]

SPACE.com: Why did Kennedy choose the moon? Were there other options that could also have shown American technological superiority and restored our pride?

Logsdon: Well, the technical basis for choosing the moon was, it was the first thing that [famed rocket designer] Wernher von Braun and others in NASA said the Soviet Union could not do with its existing rocket. They would have to build a new, larger rocket to send people to the surface of the moon. And so the moon became the first thing where the United States had, as von Braun said, a sporting chance to be first. [Giant Leaps: Top Milestones of Human Spaceflight]

SPACE.com: JFK's announcement charted the course of NASA for a decade. What were its longer-lasting effects?

Logsdon: I think it's charted the course of NASA for most of the 50 years since, in the sense that it created a large organization built around large engineering projects centered on human spaceflight, with an institutional base of civil servants and contractors and facilities that exists today, and still has the expectation that the country will provide support.

I kind of look at the budget curve for Apollo as a rollercoaster. Kennedy's commitment took the space program up the front end of that rollercoaster and over the top, and the momentum has lasted a long, long time. I think it's just about gone now.

SPACE.com: Kennedy knew this would be a hugely difficult task. Did he worry much that it would be feasible, from a technological or economic standpoint?

Logsdon: Well, I don't think Kennedy understood the technology very well. His advisers said, with adequate funding, this could be done, that there were no major technological obstacles. He became increasingly concerned, as the budget rose exponentially, that the money was being well-spent. But he was, I think, to the end of his life, willing to provide the money needed to achieve succees.

SPACE.com: Didn't he consider teaming with the Soviets on this mission at some point?

Logsdon: By 1963, the United States had made enough progress, I think Kennedy came to the conclusion that Soviet domination of space was no longer a real threat, that the United States was on the path to a very good capability. And he was concerned about the money, and so he started talking.

He had a meeting with the Soviet ambassador Drobynin at the end of August of '63, saying, "What do you think? Might there be grounds for cooperation, to save money? If Mr. Khruschev was interested, we'd be very interested in cooperating." And that feeler went to the Kremlin and came back saying, It seems like there might be some interest in it. It led to his proposal to the U.N. in September the 20th, to think about doing a joint mission to the moon. [Top 10 Soviet and Russian Space Missions]

SPACE.com: But that's as far as it went; nothing ever came of it. Why not?

Logsdon: Kennedy, in the two months left in his life after September the 20th, pushed rather hard, and his associates pushed rather hard, to see whether cooperation might be possible. It took a while to get a response from the Soviet Union, but ultimately, in early November, Khruschev said, "Why not? Maybe we should think about this."

Kennedy, on November the 12th, issued a presidential order to the head of NASA, Jim Webb, saying, "Find ways to do this." Ten days later, he was dead. And Apollo became a memorial to a fallen president, and any chance of cooperation, I think, disappeared with Kennedy's assassination.

SPACE.com: So now, four decades later, what do people think about the Apollo program? What's its legacy?

Logsdon: Well, I think the assessment is mixed. I mean, there is this group of people, primarily but not only young people, who don't think it ever happened, that it was staged on a soundset someplace. There are people that think it was just a propaganda stunt of no lasting value.

And then there are people like me that believe that, at the time and since then, it has been something we can peg our love of country to, to be kind of corny about it. But to be the citizen of a country that can do grand things like that still is meaningful, I think. And we use the symbols even today as symbols of national pride and national accomplishment.

SPACE.com: Do you think Apollo's success hurt NASA, or the case for space exploration, in the long haul? After sending humans to the moon, making repeated trips to the International Space Station seems pretty underwhelming.

Logsdon: Well, President Obama went to the Kennedy Space Center on April 15, 2010, and said, "We're not going back to the moon. We've been there." And his attitude is probably typical of the American elite who are not deeply involved in space. [Gallery: President Obama and NASA]

So the compelling case for continuing exploration into deep space has yet to be made. It's something that lots of us kind of intuitively and emotionally are attached to, but selling that to the general public has proven to be very difficult absent the kind of challenge that led to Apollo.

SPACE.com: Are there any surprising things about Kennedy's speech? What are some details people might not know about it?

Logsdon: As he went back to the White House with Ted Sorensen, his speechwriter, Kennedy said, "That didn't go over well, did it?" The press reporting said that at least the Republican side of the aisle kind of had no reactions to the speech. It wasn't greeted with enthusiasm by the members of Congress. And Kennedy extemporized parts of the speech, which he rarely did, trying to win the argument of why this should be done.

So it wasn't clear until maybe a week or two or three later that there would be the political support needed to get started on this sort of thing. It was not a slam dunk.

SPACE.com: And it probably wouldn't have happened without those embarrassing Cold War defeats — getting beat to space by Gagarin, and then the Bay of Pigs fiasco less than a week later. Is that safe to say?

Logsdon: Yes. It was a response to the specific pressures of April 1961. But responding to these pressures, Kennedy reached for something lasting and spectacular and grand, not just a short-term fix.