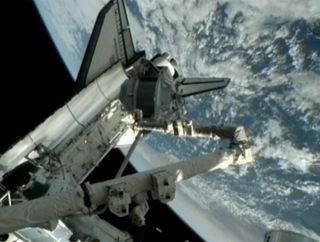 The Alpha Magnetic Spectrometer is transferred out of the space shuttle Endeavour's cargo bay by the shuttle's robotic arm on May 19.
(Image: © NASA TV)

HOUSTON — More than 500 scientists around the world breathed a sigh of relief today (May 19) when their massive Alpha Magnetic Spectrometer, an experiment 16 years in the making, finally arrived on the International Space Station.

The $2 billion instrument was delivered by the space shuttle Endeavour's crew when they arrived at the orbiting laboratory yesterday. It was installed today in a series of tricky robotic maneuvers. Endeavour launched on its final mission May 16. [Photos of Shuttle Endeavour's Final Launch]

"Isn’t it a relief that it's no longer our responsibility, that it's safely installed," Endeavour's commander Mark Kelly said today after completing the operation. "It's a great day for science."

Researchers hope these data will help reveal the particles behind the mysterious dark matter that is theorized to exist, but has never been detected, as well as solve other cosmic conundrums such as the story behind antimatter and so-called strange matter.

"We hope it will really make an important contribution to our understanding of the origin of the cosmos," said Nobel Laureate Samuel Ting, the principal investigator of AMS and a professor at the Massachusetts Institute of Technology, during a news briefing after the installation. "We entered into a region nobody has entered before. What we're going to see, nobody knows."

Within hours of being installed, the machine had already detected at least two high-energy particles that have never been observed in nature before, and to date had only been created inside particle accelerators on the ground.

"Right away we began to see an enormous amount of data coming down," Ting said. "We have thousands and thousands of signatures already." [Antimatter Hunter: Q&A with Nobel Laureate Sam Ting]

For all its promise, the experiment almost never got a chance to fly. After the space shuttle Columbia accident in 2003, NASA cancelled the shuttle mission that was slated to carry AMS to space. It was only after hard lobbying by scientists and a bill passed in Congress that a new shuttle mission was added to NASA's schedule to fly AMS.

Not only did today's installation go off without a hitch, but the experiment itself seems to be functioning exactly as designed so far.

"We have no major issues, also no minor issues," Ting said.

Now, researchers said, it's time to let AMS do its job, and wait for the secrets it reveals.

"From a NASA agency perspective, this is a major historic day," said NASA AMS program manager Mark Sistilli. "A science voyage of discovery has started today. We cannot say enough how proud we are to have a world-class science facility like this on the space station."