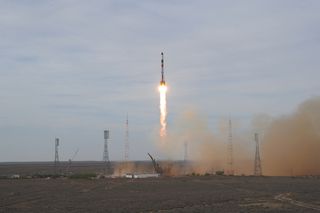 A Russian Soyuz rocket blasts off from Baikonur Cosmodrome in Kazakhstan carrying the Progress 42 cargo ship on April 27, 2011. The Progress cargo ship will deliver supplies to the International Space Station.
(Image: © RSC Energia)

Before the shuttle Endeavour can receive final clearance for takeoff Friday afternoon, a Russian-made cargo freighter must make a smooth flight to the International Space Station.

Step number one was accomplished Wednesday (April 27) when that unmanned resupply ship successfully launched atop a Soyuz booster from Kazakhstan at 9:05 a.m. EDT (1305 GMT).

The preliminary orbit was achieved after a nine-minute ascent provided by the three-stage rocket, and onboard commands were issued to unfurl the craft's communications and navigation antennas and extend two power-generating solar arrays that span 35 feet.

A series of precise engine firings over the next two days will guide the Progress toward an automated rendezvous with the station. The docking is slated for Friday at 10:29 a.m. EDT (1429 GMT), just five hours and 18 minutes before Endeavour's scheduled launch.  [Complete Coverage: Shuttle Endeavour's Final Mission]

Shuttle Endeavour's original April 19 launch date was postponed by 10 days to deconflict with this vessel's arrival. Flight controllers opted against having the freighter rendezvous with the station while the shuttle was there, forcing Endeavour to wait on the ground until after the Progress was launched and docked.

The 24-foot long ship will attach itself to the open port on the Pirs compartment, which was vacated last Friday when a previous Progress was jettisoned to burn up in the atmosphere.

The craft will bring two-and-a-half tons of supplies to the station, continuing the constant stream of provisions sent up the orbiting complex. The "dry" cargo tucked aboard this Progress amounts to 2,976 pounds in the form of food, spare parts, life support gear and experiment hardware.  [Photos: Building the International Space Station]

The refueling module carries 1,940 pounds of propellant for transfer into the Russian segment of the complex to feed the station's maneuvering thrusters. The vessel also has 926 pounds of water and 110 pounds of oxygen.

The cosmonauts will be standing by Friday to take over manual control of the approaching Progress spacecraft if the autopilot experiences a problem. They spent time Tuesday reviewing procedures and conducting refresher training on the backup system just in case it is needed.