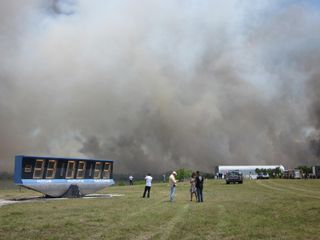 A brush fire near NASA's Kennedy Space Center press site casts off thick smoke on April 27, 2011 as the space agency prepares to launch the space shuttle Endeavour's STS-134 mission from the nearby Launch Pad 39A. Liftoff is set for April 29.
(Image: © Clara Moskowitz/SPACE.com)

"It's a brush fire," NASA spokesperson Candrea Thomas told SPACE.com as smoke billowed from the fire about 3 miles (4.8 kilometers) from Endeavour's seaside pad. "We have our fair share out here. Fish and Wildlife Service is responding."

While fire personnel respond to the fire, it is not expected to affect the launch preparations for Endeavour's liftoff, which is scheduled for 3:57 p.m. EST (1947 GMT) on Friday from Pad 39A at the spaceport in Cape Canaveral, Fla. [Photos: Shuttle Endeavour's Final Mission]

By coincidence, the fire occurred during a NASA tweetup at the Kennedy Space Center press site to discuss Endeavour's upcoming mission with the space agency's devoted fans on the social networking website Twitter. The minor blaze sparked a flurry of Twitter comments.

"WOW! The fire has gotten a lot closer to the press site," wrote Andy Scheer, a cryogenics lead technician at NASA's Launch Pad 39A who posts updates on Twitter as @apacheman.

Despite the fire, NASA remains on target to launch Endeavour on its final mission, called STS-134, before being retired to a museum, officials said. The shuttle's six-astronaut crew will fly a 14-day mission to deliver spare supplies and a new astrophysics experiment to search for exotic subatomic particles.

"There's absolutely no immediate danger and no impact to STS-134," Thomas said.

This upcoming voyage is Endeavour's 25th spaceflight and is the next-to-last flight for NASA's three-orbiter fleet. After it lands, Endeavour will be processed and sent to the California Science Center in Los Angeles for public display.