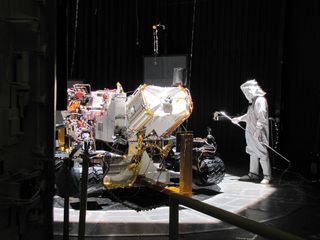 Testing of the Mars Science Laboratory rover, Curiosity. Evaluations during March included use of a space-simulation chamber designed to put the rover through operational sequences in environmental conditions similar to what it will experience on the surface of Mars.
(Image: © NASA/JPL-Caltech)

THE WOODLANDS, Texas — NASA is close to deciding on a landing site for its Mars rover Curiosity, a nuclear-powered mega-robot designed to reconnoiter the Red Planet as never before.

Curiosity is being readied for its sendoff to Mars later this year. The rover’s task will be to prowl around for environmental conditions favorable for microbial life and to collect evidence about whether Martian life ever existed.

Loaded with scientific gear, Curiosity is built to have a minimum driving range of 12 miles (20 kilometers), but likely can travel much farther over the course of its prime mission of one Martian year (two Earth years).  [Best (and Worst) Mars Landings of All Time]

But getting down and dirty on Mars first means use of a unique entry, descent and landing system. No landing bags this go-around. Rather, a "Sky Crane" is to lower the rover on cables, placing it directly onto the planet's surface.

Four sites are under consideration for landing the Mars Science Laboratory, culled from more than 50 candidates that have been reviewed during the past four years. The scientists engaged in picking these top sites said they represent compelling locations where Curiosity can significantly advance knowledge regarding the conditions and potential habitability of Mars.

"Preliminary landing simulation results indicate that all four of the landing sites are safe, so it does not look like landing safety will be the main discriminator," said Matthew Golombek, senior research scientist and Mars Exploration Program landing site scientist at NASA's Jet Propulsion Laboratory in Pasadena, Calif. Part of the reason for this is that the rover/Sky Crane system is  "slope compliant," he told SPACE.com, meaning that it can easily land on sloped Martian terrain.

Golombek said analysis is ongoing regarding MSL's ability to traverse the Martian landscape, to distinguish, for example, how long the rover will take to get to the edge of a landing ellipse and then roll onward to specific targets of interest. The results of that work should be presented at the upcoming — and final — landing site workshop in mid-May, he said.[Video: Building Curiosity: NASA's Next Mars Rover]

"The landing site [selection] process has been going on for quite some time," Golombek said here at the LPSC meeting. A landing spot's attractiveness is driven by both the hunger for good science, he said, and getting the Mars machinery down safe and sound.

Safety is the watchword. On the one hand, smooth areas relatively free of deep dust and large rocks are optimal. On the other hand, such landing zones, almost by definition, are fairly dull scientifically.

Given MSL's precision-landing skills, the footprint for a targeted spit of Mars landscape is small. That being the case, NASA can aim to land Curiosity in relatively boring sites that border on more interesting spots. In the case of three of the four possible landing zones, the area where the rover would touch down is not of particular interest, Golombek said, "but it's right next to something that we're very interested in."

Being nuclear-powered, Curiosity cannot go to a location that has either water or ice within one meter of the surface, Golombek noted, due to planetary protection guidelines.

According to JPL's Golombek, all four remaining sites clearly possess high science merit and were deemed to be generally safe and welcoming to Curiosity's initial wheels-down rest stop.

Meanwhile, last-minute checkouts of Curiosity are under way. The countdown clock is ticking, with the launch window for MSL extending from Nov. 25 to Dec. 18, 2011.

Once the output from the forthcoming May landing site meeting is in hand, a three-day independent review will take place. "That will all be wrapped up and brought forward to NASA headquarters, which will make the [final site] selection probably in the June-July time frame," Golombek reported.