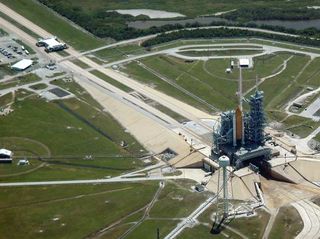 A crawler carrier vehicle (left) leaves behind the space shuttle Discovery on April 13, 2005 a few days after delivering the shuttle launch stack to Pad 39B at Kennedy Space Center. Discovery is set to roll back toward the Vehicle Assembly Building on May 26.
(Image: © NASA/Richard Clark.)

Instead offlying high above Earth this week, NASA's shuttle Discovery is crawling downfrom its launch pad to switch external tanks, a move that has delayed itsflight and caused dismay among astronauts on Earth and in space.

"I knowthat people are disappointed when the shuttle launch delays...it is adisappointment," said veteran astronaut Eileen Collins, commander of Discovery'sSTS-114 mission, during a press conference this month. "But we want to makesure we understand everything that we're studying and that we don't rush intothings."

Before the currentdelays, Discovery's seven-astronaut crew planned to launch spaceward on Sunday,May 22 for a 12-day flight that would not only return NASA's independentability to loft humans into orbit, but also shakedown new safety measures andresupply the International Space Station (ISS).

However, concernsover the potential danger of icedebris from Discovery's external tank led mission managers to call for a swap,drawing out the shuttle's launch to no earlierthan July 13.

Discovery'slaunch delay not only tacked extra time on Earth for the seven STS-114crewmembers, it also lengthened the amount of time the space station -currently manned by the two-member crew of Expedition11 - must wait for a shuttle resupply mission. NASA space shuttles have notvisited the ISS since December 2002, when the Endeavour orbiter undockedfrom the station and returned to Earth during the STS-113mission.

"We'drather see the space shuttles up here sooner rather than later," said NASAastronaut John Phillips, flight engineer for Expedition 11, during a NASA TV videodownlink with CBS News. "I was certainly disappointed."

But theastronauts agreed that, launch chagrin aside, paying strict attention to safetyand risk management - not schedules - should be the prime concern for NASA'sspace shuttle program.

NASA's threeremaining space shuttles have been grounded since Feb. 1, 2003, when theColumbia orbiter broke apart during reentry, killing all seven astronauts onboard.Wing damage sustained at launch by external tank foam debris was later found tobe the accident's cause. Engineers have since redesignedthe fuel tank to for all future shuttle flights.

Once Discovery rolls back inside the 52-story Vehicle Assembly Building, engineers will pry the orbiter from its launch stack and attach it to another one whose external tank bears a new heater to eliminate harmful ice debris from shaking loose of its external tank. The rollback process was itself delayed slightly to allow shuttle engineers time to check Discovery's landing gear for cracks.

For theSTS-114 crew, there are two sides to Discovery's launch delay.

"I think it'sa mix of frustration and relief," Thomas said. "It's also given us a bit ofleeway, so we have some time to relax and collect our thoughts."

The lastfew weeks of April were packed full of training maneuvers, from sunrise tosunset, as the crew ramped up to Discovery's May launch date, STS-114astronauts said. That April training led to an early May dress rehearsalof the final hours before launch, during which Discovery's crew donned orangeflight suits and climbed inside their orbiter for the mock-launch abort.

"Everyflight has a certain amount of anxiety to it," Thomas said, adding that STS-114is no different. "This is probably one of the most important shuttle flights in20 years...we're going to show that the agency has bounced back and recoveredfrom that terrible accident."

"Putaltogether, it's going to be a very ambitious mission," Thomas said. "I lookforward to getting on with it."

Meanwhile,the two Expedition 11 astronauts aboard the ISS are eagerly awaiting Discovery'slaunch, if not just for the company of another seven humans at the station.

On May 25,they rehearsed the photography inspection procedures they will perform asDiscovery flips around during docking to expose its thermal tile-coveredunderbelly to the ISS crew. Krikalev and Phillips have also practiced airlockoperations to prepare for the three spacewalks planned while Discovery isdocked at the space station, as well as packed up trash, used equipment andother unneeded items that will eventually return to Earth with the shuttle.

Krikalevpointed out that while Discovery's slow progress toward launch may bedisheartening to NASA personnel at Houston's Johnson Space Center, and Florida'sKennedy Space Center, there are global effects as well.

"Not onlyare people in Houston and Florida disappointed, but also NASA's internationalpartners," said Krikalev, a veteran Russian cosmonaut, during the videodownlink. "The problem is integrated, and every delay has a chain effect."

"We havethree big electrical trusses, a Japanese lab, a European lab and othercomponents all waiting to launch," Phillips told SPACE.com of the station'sshuttle needs before his mission. "In order to complete the station, we have toget the shuttle flying."