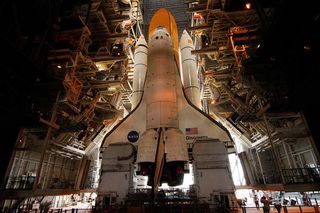 The space shuttle Discovery and its booster-external tank stack are backlit by the open VAB doors as they rollout to the launch pad for the first time under NASA's STS-114 mission.
(Image: © NASA/KSC.)

Space shuttleengineers have no worries over the planned swap out of the Discovery orbiter'sexternal tank this month, a major step forward in NASA's first return to flight mission.

Riley'steam and a host of other engineers and technicians are preparing to exchangeDiscovery's fuel tank with a replacement equipped with an extra heater to limiticedebris hazards to the orbiter during launch.

Discovery'sSTS-114 mission, commanded by veteran astronaut Eileen Collins, is slated launchspaceward from Pad 39B no earlier than July 13 of this year. The orbiter isNASA's first shuttle to fly since the loss of Columbia and its seven-astronaut crewduring reentry on Feb. 1, 2003.

NASAofficials pushed back Discovery'slaunch from a May 22 target to allow time for additional ice debris tests andthe tank change out.

It isactually the orbiter that moves between external tanks, not vice versa, Rileytold SPACE.com.

During theprocess, technicians will detach Discovery from its perch alongside its current154-foot-tall (46-meter-tall) tank, and hoist it over the launch stack towardsa different work bay. There, the external tank for Discovery's follow-upmission STS-121 aboard Atlantis, is awaiting its new spacecraft.

"Once weget the [Discovery] back into the bay, it's roughly a five-day process," Rileysaid. "It's pretty straightforward then."

Discoveryand its launch stack are expected to cross the 4.2 miles (6.7 kilometers)separating the launch pad and 52-story VAB next week, NASA officials saidWednesday. The move will follow a May 20 fuelingtest of the current tank, they added.

The tank swapwill mark the eighth time a NASA space shuttle launch stack has been rolledback into the VAB for a partial or complete disassembly. Technicians mostrecently adjusted a shuttle launch stack in 2003, when they destacked thelaunch system for the Atlantis orbiter, Riley said. At that time, Atlantis wasexpected to carry the STS-114 crew into orbit in March 2003.

The drivingforce behind Discovery external fuel tank swap is launch and crew safety.

In 2003,investigators traced Columbia's destruction back to wing damage caused by asuitcase-sized chunk of foam insulation that separated from the tank's bipodramp, where an orbiter connects to a fuel tank, and struck the shuttle duringlaunch. NASA has since redesignedshuttle external tanks to replace bipod ramp foam with a heater at the.

But lastmonth, shuttle managers announced that ice forming on an external tank's bellowsunit, which expands and contracts in response to supercold fuel, could pose a similardanger to Discovery if it strikes the orbiter during the high speeds of launch.

The newheater, combined with a drip lip modification to the bellows unit, should limitthat risk, NASA officials said. Heater kits arrived on May 5 for both theSTS-121 launch - which will feed Discovery's main engines in July - and forET-120 currently attached to the STS-114 launch stack, they added.

"The heateris here and they're doing the work on it," said USA spokesperson Tracy Yates.

"The returnto safe flight brings me great satisfaction in that we faced the adversity of[Columbia's] tragedy and recovery as a team, and together carried out therigorous and responsible plan for getting back into the business ofspaceflight," USA president and CEO Michael McCulley said in an e-mailinterview. "We can now focus our energy and talents on safe, successfulmissions."

"Itcertainly has values in that respect," Riley said. "The guys jump at anychance, whether we're mating or de-mating hardware, to work with an orbiter."

BeforeRiley and his team can carry out Discovery's external tank swap, they must firstwait for NASA to put the orbiter's current tank through its second fueling test.

Launch managershope the May 20 tanking test, which will fill Discovery's external tank withmore than 500,000 gallons (1.9 million liters) of liquid oxygen and liquidhydrogen fuel, will shed light on sensor and valve questionsraised in the initial April 14 test.

In themeantime, Riley and other shuttle technicians will prepare for Discovery'srollback by conducting maintenance on the orbiter lifting swing that hoists shuttlesabout the VAB, as well as other equipment used to support the vehicle duringtransfer operations.

"I amextremely eager to see it fly," Riley said of Discovery. "I am even more eagerto see it land [back] here."