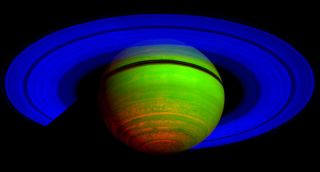 This false-color composite image, constructed from data obtained by NASA's Cassini spacecraft, shows Saturn's rings and southern hemisphere. The image was made from 65 individual observations by Cassini's visual and infrared mapping spectrometer on Nov. 1, 2008.
(Image: © NASA/JPL/ASI/University of Arizona)

Saturn is a changeable world that pumps out surprisingly variable amounts of heat from season to season and year to year, a new study has found.

As if it operating on a dimmer switch, Saturn emitted less energy every year from 2005 to 2009, according to observations made by NASA's Cassini spacecraft in orbit around the ringed planet. Saturn's energy output also changed with the planet's seasons, and its pattern differed from the early 1980s, the last time a spacecraft visited the planet, surprised researchers said. [Cassini image of Saturn.]

"The fact that Saturn actually emits more than twice the energy it absorbs from the sun has been a puzzle for many decades now," said study co-author Kevin Baines, a Cassini scientist at NASA's Jet Propulsion Laboratory in Pasadena, Calif. "What generates that extra energy? This paper represents the first step in that analysis."

The research team picked up on the never-before-seen Saturn patterns by analyzing observations made by Cassini's composite infrared spectrometer, which measures the heat the planet is giving off.

The scientists found the heat emissions to be quite variable over both time and space — some unexpected news.

"In planetary science, we tend to think of planets as losing power evenly in all directions and at a steady rate," said the University of Houston's Liming Li, who performed the research while at Cornell University. "Now we know Saturn is not doing that."

Instead, Saturn's outgoing energy flow was lopsided, with the southern hemisphere giving off about one-sixth more energy than the northern half from 2005 to 2009, said Li, lead author of the study.

This effect matched up with Saturn's seasons. Over those five Earth years, it was summer in the southern hemisphere and winter in the northern hemisphere of Saturn. (Saturn takes nearly 30 Earth years to orbit the sun, so one season on the ringed planet lasts about seven Earth years.)

And Cassini found that Saturn as a whole was slowly cooling down over the five-year period, emitting gradually less energy every year from 2005 through 2009, researchers said.

The scientists reported their results recently in the Journal of Geophysical Research-Planets.

Different than it used to be

The researchers wanted to know if such trends on Saturn change over time, so they looked at observations made by NASA's Voyager spacecraft in 1980 and 1981, which was about one Saturnian year ago.

They didn't see the same imbalance between the southern and northern hemispheres. Instead, the two regions were much more consistent with each other.

Why wouldn't Voyager have seen the same summer-versus-winter difference between the two hemispheres? One possible explanation is that Saturn's cloud patterns fluctuated, blocking and scattering infrared light differently, researchers said.

"It's reasonable to think that the changes in Saturn's emitted power are related to cloud cover," said study co-author Amy Simon-Miller of NASA's Goddard Space Flight Center in Greenbelt, Md. "But to fully understand what is happening on Saturn, we will need the other half of the picture: the amount of power being absorbed by the planet."

That's the next step in figuring out Saturn's internal heat pump, researchers said. Scientists know how much energy the sun delivers to Saturn. If they can measure how much of this energy the ringed planet absorbs and how much it reflects, they can figure out how much of Saturn's heat comes from the planet itself.

Better understanding Saturn's internal heat flow "will significantly deepen our understanding of the weather, internal structure and evolution of Saturn and the other giant planets," Li said.