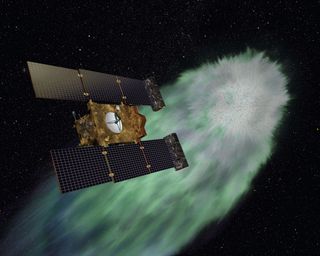 Comet Tempel 1 has been the target of two NASA missions. Here, an artist envisions what the approach of NASA's Stardust-NExT spacecraft may look like when it arrives at Comet Tempel 1 on Valentine's Day (Feb. 14) in 2011.
(Image: © NASA/JPL/Cornell/LMSS)

LITTLETON, Colo. – You could call it assisted suicide in space. NASA’s comet-visiting Stardust spacecraft was purposely put to death today by those that had provided tender loving care to the probe for more than 12 years.

After visiting two comets (and returning pieces of one to Earth) and traveling nearly 5.7 billion miles (9.1 billion kilometers), the Stardust spacecraft is at journey's end.

But even in its death throes, Stardust will yield valuable data for spacecraft engineers. Ground controllers commanded the spacecraft to fire up its four rocket thrusters one last time to use up its remaining fuel today (March 24). Engineers watched closely while the probe's propellant tank ran dry to help future missions gauge their fuel reserves more precisely.

A tale of two comets

NASA launched Stardust in 1999 on a $300 million mission to snatch up the first samples of a comet. The probe flew by the asteroid 5535 Annefrank in November 2002 and later zipped by comet Wild 2 (pronounced "Vilt 2") in January 2004, flying through the comet’s coma and snagging particles from that object.

Two years later, Stardust dutifully ejected its sample-carrying capsule to Earth, with that canister parachuting into the Utah Test and Training Range in the Utah desert.

But the hard-working Stardust probe wasn't done yet.

NASA recycled the spacecraft for a new $29 million mission to rendezvous with the comet Tempel 1 – a comet already visited by the agency's Deep Impact mission in 2005. [Photos of Comet Tempel 1 from NASA's Stardust]

Stardust flew by Tempel 1 on Feb. 14 — Valentine's Day — and snapped photos of the scar left behind by a Deep Impact probe that was intentionally crashed into the comet to determine its composition.

But with those achievements behind it, it's time for Stardust to rest in peace.

Saying goodbye to Stardust was a bittersweet moment here at the Mission Support Area at Lockheed Martin Space Systems.

“We call it the farewell maneuver,” said Allan Cheuvront, Stardust-NExT program manager at the aerospace firm. He gave the order to fire four thrusters on the probe until each ran dry. The burn was designed to exceed the spacecraft’s capability to perform.

To make sure Stardust didn’t put up a fuss, specially-written software was uploaded that disabled the probe’s fault protection system, allowing it to succumb self-execution style.

Cheuvront told SPACE.com just how Stardust would react in its final moments as it obeyed end-of-life orders were difficult to forecast.

Information gleaned from Stardust’s sayonara, Cheuvront said, can assist currently flying spacecraft, such as Mars Odyssey and the Mars Reconnaissance Orbiter now circling the red planet, as well as the Cassini spacecraft at Saturn.

“It will help provide a better predictor of when the fuel may go out. Then we have our future missions. Through better placement of pressure and temperature sensors perhaps we can improve our computer modeling,” Cheuvront explained.

In belching out all of its fuel, Stardust is also doomed as it drifts freely. The spacecraft’s solar panels won’t be sun-oriented and onboard batteries will slowly drain.

As a NASA planetary protection requirement, Stardust controllers ran a series of trajectories based on different oomph factors created by the burn to depletion. Those studies have shown the now wayward, sun-orbiting spacecraft has no chance of running into a planet, particularly Mars, Cheuvront said.

“Stardust was commanded to turn its transmitter off and not turn it back on,” Cheuvront said. As a 15-year veteran of Stardust moving from blueprint to spaceflight, he added: “I’ve got an empty feeling now, knowing that we’re not going to talk to it anymore.”